The Super Eagles of Nigeria lost its second game under new head coach Jose Peseiro after a 1-0 defeat to Ecuador, courtesy of a goal from Pervis Estupinan on Friday at the Red Bull Arena in New Jersey, USA.

The starting lineup for Nigeria was the same as the one that started in the 2-1 loss to Mexico, except for the inclusion of Sani Faisal who came on for the injured Innocent Bonke. Cyril Dessers and Terem Moffi started in attack, with Simon Moses and  Alex Iwobi supporting on the flanks. 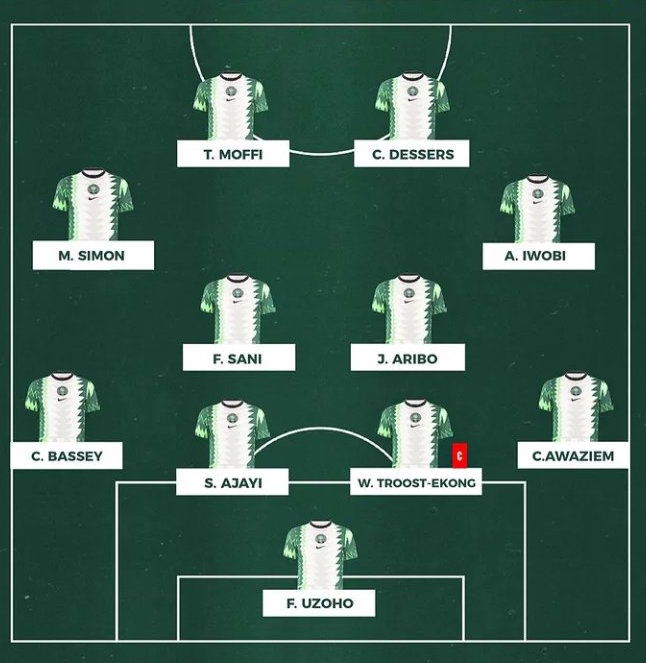 Ecuador came out firing and opened the scoring as Estupinan gave the South Americans the lead in the second minute from a free-kick.

The ball caught both Super Eagle players Chidozie Awaziem and Faisal Sani off guard as Estupinan crept in behind the pair to head past goalkeeper Francis Uzoho.

Nigeria were denied a penalty in the 13th minute after Moffi seemed to have his leg taken out by the Ecuador goalkeeper Alexander Domínguez, but the referee and his assistant agreed it was not a foul despite complaints from the Nigerians.

A defence-splitting pass from Iwobi presented a goal-scoring chance to Dessers, but goalkeeper Domingues made a good save. From the resultant corner, Semi Ajayi had a header saved before Moffi poked wide.

Ekong had to make a scrambling clearance in the 31st minute and he could easily have scored another own goal. The Super Eagles created a couple of clear-cut chances in the first half, but couldn’t find the net.

Ola Aina and Emmanuel Dennis came on at the start of the second half to replace Awaziem and Faisal. Dominguez had to be brave to save a fierce drive from Aribo in the 50th minute as the Eagles dominated ball possession and looked to find their way back into the game.

Dennis missed a chance in the 58th minute as the Nigerians continued pressing and Dominguez produced another save from Calvin Bassey in the 62nd minute. Estupinan had two chances late on in the match, but goalkeeper Uzoho did well to keep Nigeria in the game.

Peseiro sent on Victor Mbaoma for Moffi in the 85th minute. However, the Super Eagles could not find the equaliser as the match finished 1-0 in favour of Ecuador.

It was an intense game from the Nigerians with lots of positives to be taken from the Ecuador match as the Super Eagles created numerous chances in the match with 4 shots on target.

Peseiro lost his second game in charge of the Super Eagles and will be keen for a first competitive win on June 9th when Nigeria takes on  Sierra Leone in the Africa Cup of Nations Cup qualifier.

Agency Tutor Farmers On Use Of Soil Test Kit