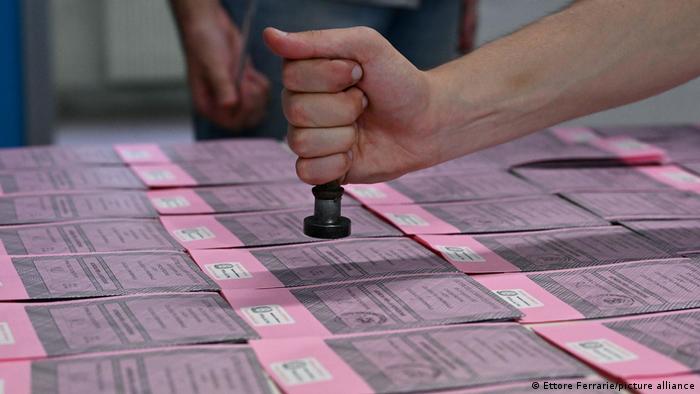 Italians are voting on Sunday in an election that is forecast to return the country’s far-right government since World War Two.

Meloni would be the obvious candidate for the prime minister as leader of an alliance also featuring Matteo Salvini’s League party and Silvio Berlusconi’s Forza Italia.

That would cap a remarkable rise for Meloni, a 45-year-old from Rome whose party won only 4% of the vote in the last national election in 2018.

That is likely to help the winning alliance most when coupled with Italy’s mixed electoral system.

More than a third of seats are won by a UK-style first-past-the-post constituency contest, and more than 60% by proportional representation across Italy.

Any alliance that wins 40% of the vote could win as many as 60% of seats, Italian commentators believe.

It is a new system so it is being closely watched, and by the right-wing alliance especially because they need the backing of two-thirds of the parliament to carry out one of their keynote policies.

Even if Brothers of Italy do top the vote, and Giorgia Meloni’s allies hand her an overall majority, it is not their decision who becomes prime minister.

That rests with President Sergio Mattarella, backed by parliament, and he plays an important role in Italy’s constitution.

There has been speculation that support for the left-leaning 5-Star Movement, the biggest party in 2018, has picked up in recent days.

A late surge by 5-Star could jeopardize the rightist alliance’s chances of winning a majority in the Senate or upper house, complicating the process of forming a government.

Even if there is a clear-cut result, the next government is unlikely to take office before late October, with the new parliament not meeting until Oct. 13.

Italy has a history of political instability and the next prime minister will lead the country’s 68th government since 1946 and face a host of challenges, notably rising energy costs.

The outcome of the vote will also be watched nervously in European capitals and on financial markets.

European Union leaders, keen to preserve unity after Russia’s invasion of Ukraine, are concerned that Italy will be a more unpredictable partner than under former European Central Bank chief Draghi.

For markets, there are perennial worries about Italy’s ability to manage a debt pile that amounts to around 150% of gross domestic product.