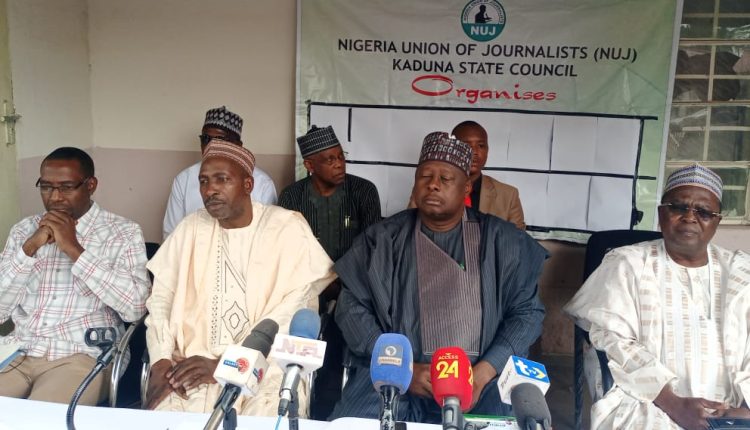 At the unveiling ceremony which held at the Kaduna NUJ Secretariat, the candidate of the Party averred that security would top his administration’s agenda if elected into power come 2023.

Ashiru assured that through the agenda, he would bring growth and development as well as succour to the people of Kaduna state if elected.

He noted with concern, the deteriorating security situation in the country and vowed to bring it to an end.

According to him, the agricultural sector which is the largest employer of labour, has been affected by insecurity and bad leadership, thereby causing hardship to the people in the state.

“Farmers would be encouraged to return to the farms and also be supported with farm inputs while subsidy on fertilizer would be restored. Most of the abandoned agricultural agencies would be revived to attract foreign grants,” he said.

On the moribund textile industry in the state, Ashiru said Kaduna state was known as the textile industry hub since the era of Sardauna of Sokoto, because the conditions for siting industry were then available.

“Aside the availability of land where the industry is located, other facilities like raw materials, electricity and equipment are no longer available for the industry to function,” the PDP gubernatorial candidate stated.

In view of the above, he said if elected, his administration would transfer the 30 megawatts of electricity that would soon start generation from Gurara Water Falls to Kudenda Industrial area in Kaduna, thus, 20 megawatts will come to Kaduna and 10 megawatts will go to the Southern zone.

According to him, there is an alternative to power generation, which is readily available. “It is transporting gas from Port-Harcourt through the turbines which is under construction and about to be completed.”

The PDP gubernatorial candidate mentioned that, the only way to attract investors back to Kaduna is by restoring frequent power supply to the state.

He said, “Kaduna is the heaven for all in Nigeria, it’s a peaceful place and we will make sure that peace is sustained to guarantee the resuscitation of textile industry and other factories in the state.

“We will do whatever is humanly possible to ensure that within the first one year in office, the 20 megawatts transmission line from Gurara Water Falls to Kudenda is completed. And also push harder to make sure that we bring back investors to Kaduna.”