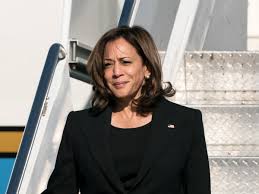 US Vice-President Kamala Harris has visited the demilitarised zone that divides both Koreas, a day after the North fired two short-range ballistic missiles off its east coast.

The launch, which “breaches UN sanctions,” comes as the US and South Korea hold joint naval drills in the waters around the Korean peninsula.

The US official also met South Korea’s leader Yoon Suk-yeol shortly after her arrival in the capital Seoul.

Provocative Nuclear Rhetoric
In a White House statement, the two leaders criticised Pyongyang’s “provocative nuclear rhetoric and ballistic missile launches“, and “reaffirmed their alignment… and goal of the complete denuclearisation of the Korean Peninsula.”

The vice-president also “underscored that the United States is committed to defending South Korea… and welcomed their close co-operation.”

With denuclearisation talks between the North and the US long stalled, these launches are part of a ‘wider pattern of escalation,’ with Pyongyang continuing to build and refine its weapons, while Washington strengthens its defences.

This week’s launches – the earlier one was on Sunday before the naval drills began – are the first since early June, but North Korea has test-launched more than 30 weapons so far this year, more than in any other single year.

Experts believe the launches are in retaliation to the joint naval drills as Washington and Seoul bolster their defence of South Korea – the four-day joint drills are the first involving a US aircraft carrier to be held since 2017.