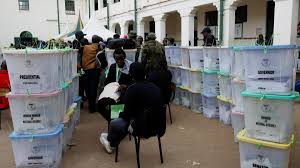 Kenya’s election body, the Independent Electoral and Boundaries Commission (IEBC) has verified and tallied votes from about half of the nation’s 291 constituencies, five days after the presidential election, with available data showing an extremely close race between frontrunners Deputy President William Ruto and former Prime Minister Raila Odinga.

The commission had relayed verified results from over 140 constituencies of the 291 and is yet to declare the results of the remaining constituencies in a process marred by chaotic scenes over counter accusations by agents of leading candidates Raila Odinga of Azimio coalition and United Democratic Alliance’s (UDA) William Ruto.

IEBC has announced enhanced measures at the Bomas of Kenya during the verification of presidential results in a bid to expedite the process.

In the revised rules of procedure, the electoral body’s commissioner, Abdi Guliye, stated that only chief presidential agents from the four presidential candidates and their assistants will be allowed in the auditorium.

Ruto’s running mate Rigathi Gachagua has assured Kenya Kwanza supporters of a win in the recently concluded polls as the IEBC continues to tally the results at the Bomas of Kenya.

Gachagua accused the Azimio agents of delaying the verification exercise at the same time lauding those from Kenya Kwanza for maintaining calm.

IEBC has recalled close to 10,000 votes were erroneously awarded to Ruto in Form 34B in the Kiambu Town constituency. The poll agency also noted that errors were made in the summation of Odinga’s vote.