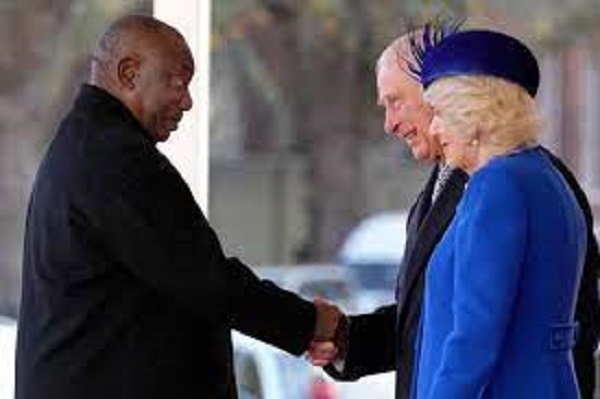 King Charles welcomed South Africa’s president at the start of the first state visit he is hosting as monarch.

The president will visit Westminster Abbey before attending a banquet hosted by the King at Buckingham Palace later.

However, it is the first state visit to the UK in more than three years after they were stopped during the Covid pandemic.

The Prince and Princess of Wales met the South African president at his London hotel in the morning before escorting him to Horse Guards Parade for the ceremonial welcome with the King.

Meanwhile, Prime Minister, Rishi Sunak, along with Foreign Secretary, James Cleverly, and Home Secretary Suella Braverman, were also at Horse Guards, where the president and King inspected soldiers from the Coldstream Guards.

More than 1,000 soldiers and 230 horses lined up on the parade ground in central London as part of the traditional opening of a state visit.

His Majesty then rode down the Mall with Mr. Ramaphosa in a carriage procession to Buckingham Palace.

The band of the Scots Guards played the South African and British national anthems as their guests arrived at the palace where the King, Queen Consort, and President are having a private lunch.

Mr. Ramaphosa, who has been head of government in South Africa since 2018, will follow the tradition of laying a wreath at the Tomb of the Unknown Warrior in Westminster Abbey, and then address MPs and peers in the Royal Gallery of the Palace of Westminster.

Later, the King will host a white-tie banquet at Buckingham Palace for Mr. Ramaphosa where both men will give speeches.

The visit follows the traditional format put in place during the reign of the late Queen Elizabeth II.

Bilateral relationship
Report says the president is hoping to use the state visit to drum up support for UK investment in South Africa to bolster the country’s economic development and industries.

“This is a reinforcement of the strong bilateral relationship that we have with South Africa, a real opportunity to build on that close working relationship and discuss some of the issues that affect us all,” British foreign minister, James Cleverly said.

The last state visit to Britain by a South African leader was that of President Jacob Zuma in 2010 when he was met by Charles and Camilla at the start of the trip.

Over 20m Nigerian children have no access to education – Obasanjo