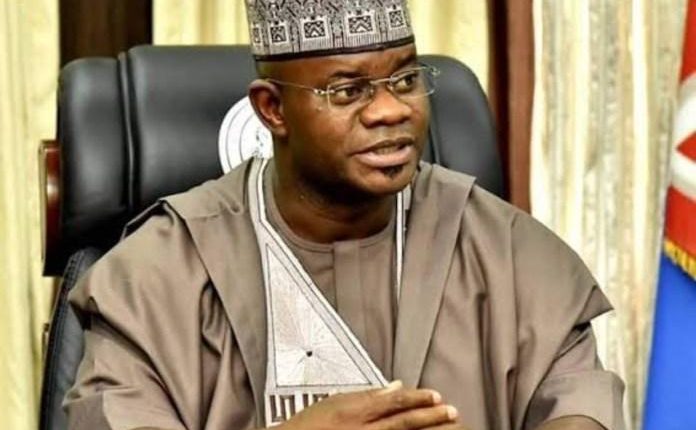 The Governor of Kogi State Yahaya Bello on Wednesday expressed confidence in victory for the All Progressives Congress APC in the 2023 general elections.

Bello made the pronouncement during the commissioning of 46 campaign vehicles donated by the APC National Deputy Publicity Secretary, Alhaji Yakubu Ajaka in Lokoja.

Our Correspondent reports that the cars were distributed to zonal chairmen, LGA chairmen of the party, and the Zonal coordinators of the GYB Network for the Asiwaju group in the state.

The governor, who was represented by his Chief of Staff,  Mr Abdulkareem Asuku, said, “our party in Kogi is in a strong cohesion to deliver maximum votes to our presidential candidate, Bola Tinubu along with winning all the national and state assembly elections.”

“The donor of these vehicles, the Deputy National Publicity Secretary of the party, Yakubu Ajaka is a worthy son of the state, who is making our state proud at the national level.

“I believe that this gesture aimed at supporting the party in the state is noble and highly appreciated.

“Kogi is blessed with people who care for the development of our party and state in general, and one of them is our own Hon. Yakubu Ajaka.

“The joy is that Kogi is fast moving into a one-party state, given that opposition parties are no longer visible across the 21 local government areas.

“As the governor, I am making sure that every member is regarded as a family, with issues addressed in-house, thus moving into the election in unison to achieve one hundred percent victory for APC, ” Bello said.

Earlier, Ajaka said that the gesture was part of his contribution to the success of the electioneering campaign and victory of the APC presidential candidate in Kogi.

“The donation or unveiling of these cars today, being Nov. 23, marked the official commencement of the electioneering campaign for Tinubu here in Kogi.

“The vehicles are for the GYB Chairmen and Coordinators across the 21 Local Government Areas of the state.

“The rationale behind this gesture is to ensure that APC grabs the maximum votes of our people for the presidential candidate and other candidates in the forthcoming general elections,” he stated.

Ajaka also disclosed that another set of cars would be distributed to women and youth Coordinators, to enable them to get to the grassroots with their campaigns.

The party chieftain called on all APC supporters and citizens to massively vote for the party’s candidates for victory at all levels.

“I want to assure the residents of Kogi that what is coming for us after the 2023 polls will be better than what we are having now,” he pledged.