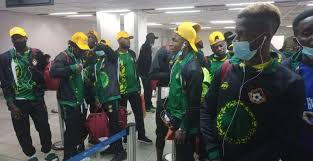 Kwara United Football Club has landed  in Niamey ahead of the CAF Confederation Cup second leg First Round encounter against AS Douanes.

The team, onboard Air Cote-D’Ivoire Airbus A319 departed by 1.45 pm from Nigeria, and had a brief stop-over in Abidjan, enroute Niamey, Niger Republic.

The team is lodged at Hotel Tenere, Central Niamey, not too far from Stade General Senyi Kountche, where the match will take place on Sunday.

The team will file out against AS Douanes on Sunday 18th September, 2022.

Kwara United FC will go into the Sunday’s crucial match with a 3-0 advantage from the first leg.

Kwara United FC came to Niamey with 20 players, and the Club Chairman, Kumbi Titiloye reminded the players and the technical crew that utmost seriousness is needed in the match.

He commended the Kwara State Governor, Mallam AbdulRahman AbdulRazaq for his support to the team, promising that the team will scale through the Niamey hurdle.