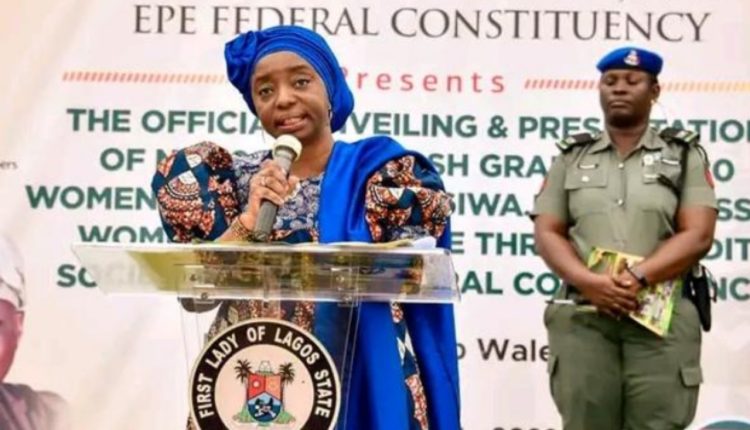 The Lagos State Government through the office of the First Lady has empowered about 500 residents with various empowerment tools.

The State also charged the youths to avoid drug-related act that can jeopardise their future.

This comes as the State holds the fourth Community Sensitisation and Empowerment programme at the Lagos House, Ikeja.

Speaking at the event, the Lagos State Governor, Babajide Sanwo-Olu said his government has been engaging Lagosians through execution of people-friendly and community-centered projects, as the Sensitisation and Empowermenmt programme was organised to enhance economic opportunities of the people.

Governor Sanwo-Olu who was represented by the Secretary to the State Government, Mrs Folasade Jaji commended the office of the First Lady for the initiative and continuous advocacy to tackle all forms of Sexual and Gender-based Violence in the state.

“It is a fact well established that family is a bedrock of any society and the stable family unit is one that will raise one strong men and women capable of leading for success and government must continue to engage the family to achieve such stability.
“Since the inception of our administration, the First Lady has been in the forefront of fight against this form of abuse and I commend her for initiating programs and project which have complemented the efforts of our administration towards building a stable society which is a key of this administration policy.” Governor said.

Wife of the Lagos State Governor, Mrs. Ibijoke Sanwo-Olu explained that the programme was conceived as a platform to link government with residents by promoting mutual understanding which is the essential ingredient required to fast-track economic growth.

“Our intention with this program is to furnish residents with information that will propel them to maximally benefit from the initiatives of the government in all sectors and sections. We are equally here to support the Greater Lagos Agenda of the administration of Mr Babajide Olusola Sanwo-Olu as encapsulated in the THEMES Agenda,” she said.

Mrs Sanwo-Olu maintained that components of the programme that started in 2019 have been sustained and improved upon with the aim to bring people closer to the government.

She however emphasised the need for stakeholders to intensify efforts to tackle the menace of drug abuse.

According to her “The stakeholders in our various communities have a key role to play to change the ugly narrative and this is why we have deliberately included the War Against Drug Abuse campaign in today’s programme to enable participants to have a better understanding of the consequences of drug abuse as well as the signs to note when one is engaging in drug abuse or illicit dealing in drugs. Drugs don’t discriminate. Either young or old, woman or man, boy or girl can become a victim. This is why we must be aware.”

Several lectures were delivered by different resource persons which include the National Drug Law Enforcement Agency on talks against Drug Abuse.

The Independent National Electoral Commission also enlightened participants on usage of Bimodal Voter Accreditation System Machine and PVC registration/awareness, while Health tips on transmission, prevention, symptoms, and treatment of Monkeypox were also served to the delight of the participants.

Political groups, community development associations, market groups, professional associations, and other stakeholders were part of the beneficiaries of the empowerment who received tools and equipment such as Grinding Machine, Dryers for Hairdressers, Pop Corn Machine, eco-friendly gas cylinders among others.