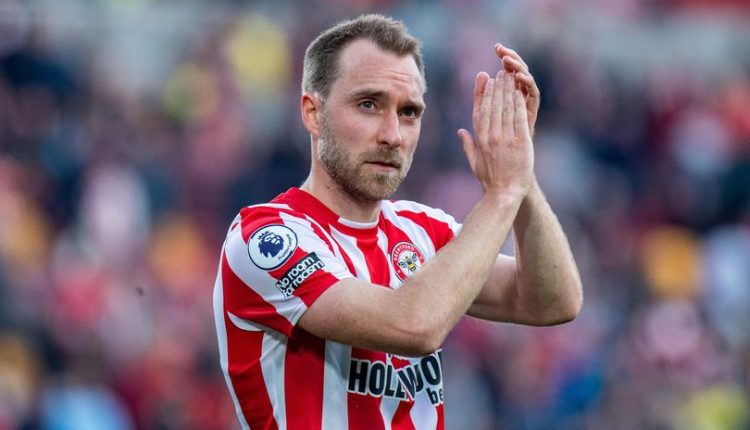 It was thought the 30-year-old would prefer to remain in London after making a successful comeback with Brentford in the second half of last season.

The Bees hoped Eriksen would stay on while it was thought Tottenham Hotspur were also keen to re-sign him.

However a deal has not been agreed with either club, giving United the chance to make an offer for the free agent.

Eriksen had cardiac arrest while playing at Euro 2020 last June but was able to resume his career after being fitted with an Implantable Cardioverter Defibrillator (ICD).

After being released by Inter Milan – because the ICD device is not permitted in Serie A – Eriksen accepted Brentford’s offer of a six-month contract in January and manager Thomas Frank repeatedly said the Bees wanted to keep the former Ajax playmaker.

Eriksen left Tottenham for Inter in January 2020, helping them win the Serie A title in 2020-21 under current Spurs boss Antonio Conte.

Before he made his return to competitive football by joining Brentford, Conte said “the door is always open” to him training with Tottenham.

Manchester United’s move for Eriksen is unrelated to their continued efforts to sign Frenkie de Jong, with the Old Trafford club in contact with Barcelona about his availability.

Erik ten Hag has made the 25-year-old Netherlands midfielder his main summer transfer target but De Jong, who played for United’s new manager at Ajax, went on holiday without making a decision over his future.

Last year Barca announced they were 1.35bn euros (£1.15bn) in debt, so the Spanish club are trying to generate revenue for their own squad rebuilding plans and De Jong is viewed as one of their most saleable assets.

Ideally, Ten Hag would get clarity over both situations before his non-international players return for the start of pre-season training next Monday.

Cameroon moves to stamp down on Age cheating