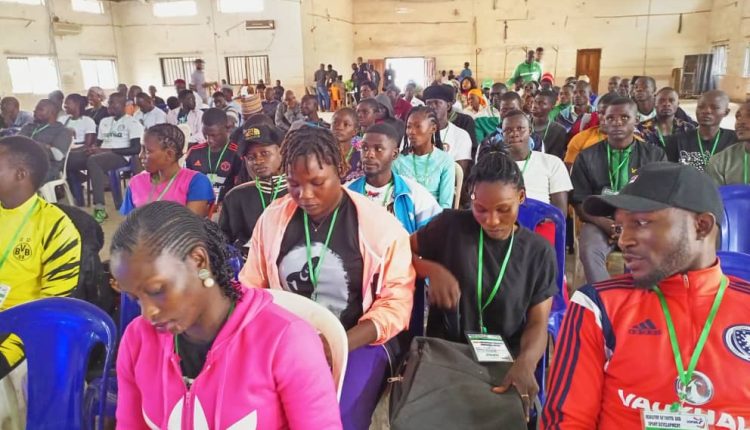 Last updated Aug 12, 2022
0 322
Share
Coaches and Athletes in Nasarawa State have been urged to shun the use of substances (doping) to enhance performance in sports.
The state commissioner for Youth and Sports Development, Isaac Yargwa stated this at a one-day sensitisation and awareness campaign on doping in Lafia, the state capital.
He appreciated the organizers of the program, saying that awareness aims to promote sports science, technology, and medicine while also curbing the use of substances to enhance performance.
Commissioner said athletics welfare is his priority as he had promised when he assumed office as the commissioner that he would improve the take-home pay and other benefits entitled to them which he confirmed has been achieved.
“So many people have been banned from participating in sporting activities due to the use of hard drugs, therefore, we are here to make sure that our athletes perform without using some of these drugs or even alcohol,” Yargwa said.
The commissioner, however, revealed that the contracts of coaches and athletes in the state have expired since April 2022, assuring that the state government was working out modalities to renew the contracts before the forthcoming national games.
“Many of you have performed  well so we hope that we shall renew your contracts and as we  will be signing this new contract,  your welfare package will be improved as well to boost your performances,” Yargwa added.

Speaking, the Director of planning, research, and statistics, Ministry of Youth and sports development, Mr. Uba Musa, said he initiated the sensitization awareness in preparation for the upcoming National sports festival in Bayelsa, in November this year.

The senstitation is necessary for coaches and athletes to know the danger of using Performance Enhancing Substance (Doping) during any sporty activities.
He, therefore, calls on the coaches and athletes to listen carefully to the lecture of the day in order not to fall a victim to substance intake for sports enhancement.
In a paper presentation, titled: Ergonomic Aids, Influence and Effects on Sports Performance Among Athletes, a Lecturer at the Department of physical and Health Education, College of Education, Akwanga, Ibrahim Tanko Tukur, said athletes will suffer adverse health effects and even premature death when associated with the doping practices.
“These adverse outcomes and deaths lead to the first ban on doping by the International Association of Athletics Federation (now World Athletics) in 1928,”  Tukur said.
Some of the participants who spoke with journalists, including Esther Obile and Godiya Dogara, both appreciated the state government for organizing the program.
They said that the program has exposed them to the dangers of using performance-enhancing drugs capable of destroying their lives.
Drug abuseMental healthnasarawa sportsSports developmentsports healthsubstance abuse