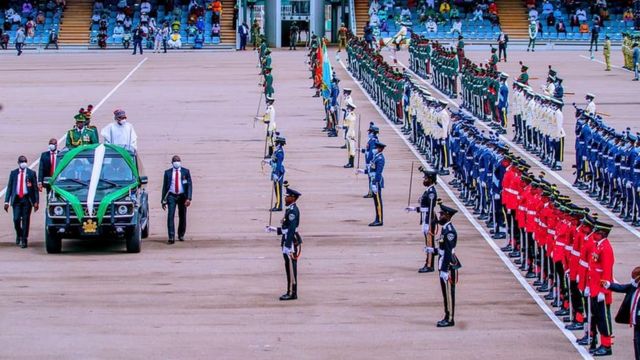 Undoubtedly, democracy comes with some dividends which are beneficial to the people. In conceptualizing the dividends of democracy therefore, the major perspective is that in its truest form, it engenders good governance, the provision of infrastructure, basic amenities, economic growth, high per capita income and rise in the standard of living of the people, as well as human capital development.

Nigeria, in the past 23 years of uninterrupted democracy, has been able to provide critical infrastructure for the people of the country more than it ever did during all the years of military rule.

For instance, the democratic administration of former President Olusegun Obasanjo licensed private organisations to provide the Global System for Mobile Telecommunication, which has ostensibly revolutionised the telecommunications sector in the country. Today, not only is mobile telecommunications available in remote villages in Nigeria, it also serves to empower the people to communicate and participate in public discussions.

On road infrastructure, democracy has birthed massive road constructions across the country, with constructions underway of the Lagos-Ibadan Expressway, the Abuja-Kaduna-Kano road and the Second Niger Bridge, all glaring evidence of the dividends of democracy in Nigeria.

There have also been massive investments in the railways, which was in a state of neglect during the years of successive military administrations. The construction of the Abuja-Kaduna standard gauge rail line; the completion of the 156km Lagos-Ibadan Railway, with extension to the Apapa Sea Port and the re-starting of the Itakpe-Warri Rail line whose construction began during the military era, point to developments that can only be credited as dividends of democracy.

Among other manifestations of the dividends of democracy in Nigeria are the 614km Ajaokuta-Abuja-Kano Gas Pipeline and the Lekki Deep Seaport. Because these mega-infrastructure projects cannot be funded through budgetary allocations, the Nigerian government instituted initiatives to leverage their execution. The Nigeria Sovereign Investment Authority was set up in 2012 with $1billion seed capital.

The administration of President Muhammadu Buhari also established the Infrastructure Corporation of Nigeria, InfraCo, to raise about $36.7billion to drive infrastructure development, including the approval of a $2billion seed capital for the Corporation.

Similar dividends of democracy are still being recorded in other economic sectors like agriculture, health and education.

On social investment, the democratic dispensation of President Buhari has made some significant, deliberate efforts in this regard. The Social Investment Programme is the biggest of such interventions in Africa, with a budgetary allocation of N500 billion when it began in 2016.

The programme has through its components, the N-Power, the National Home-grown School Feeding Programme, the Conditional Cash Transfer and the Government Enterprise Empowerment Programme, impacted on Nigerians across the country.

It must however, be noted that so much more enduring dividends of democracy would have been recorded but for the limitation of resources, occasioned by the fallout of the COVID-19 pandemic, with its ripple effects on nearly every country around the globe and on virtually every productive sector.

Compounding the country’s dwindling revenues is the challenge of insecurity – yet another global phenomenon – that remains a major obstacle to Nigeria’s aspiration to attain optimum levels in the provision of dividends of democracy to its people.

The ultimate power in a democracy resides with the people who decide those who will steer the affairs of their state for specified terms, as well as the freedoms and rights that enable the exercise of such decisions by the people, as guaranteed in the Constitution.

Underpinning these Constitutional freedoms and rights is the fundamental Freedom of the Press, which galvanises and ensures that debates and discuss on the future of the country are hinged on facts and issues of collective value, good governance, accountability, transparency, inclusivity, responsiveness and citizens’ participation.

In Nigeria’s 62 years as an independent country, 29 years have been under the military and were characterised by authoritarian rule, gagging of the media, lack of transparency and the absence of accountability.

As democracy deepens in the years to come, Nigerians are hopeful for more enduring dividends of democracy in the provision of sustainable infrastructure and the freedom to exercise the power to not only choose their leaders but to hold them accountable for their stewardship.