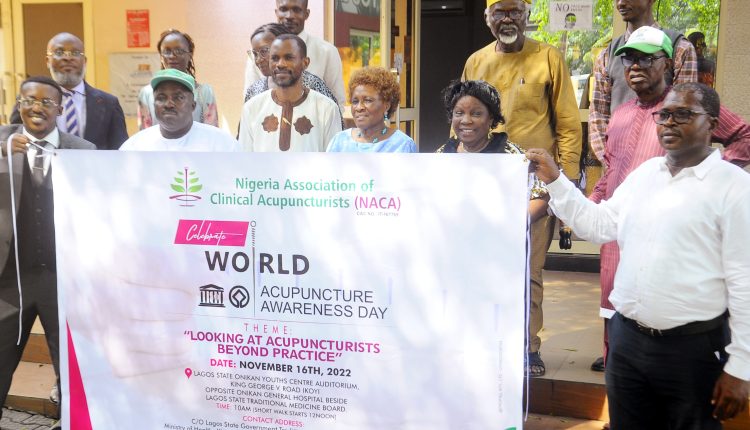 All roads led to the Onikan Youths Centre, Ikoyi, as the Nigeria Association of Clinical Acupuncturists (NACA) organised the first World Acupuncture Awareness Day in Africa on Wednesday in Lagos.

The Theme, Looking At Acupuncturists Beyond Practice, was extensively discussed by Lagos State Traditional Medicine Board members led by the Chairperson Prof Adefule-Oshitelu.

According to her, Nigeria Association of Clinical Acupuncturists (NACA), met the requirements of the United Nations which birthed today’s celebration. This event was held first in Nigeria in the entire region of Africa which speaks volume.

Prof. Oshitelu reiterated the commitment of Lagos State Traditional Medicine Board in supporting NACA under the Chairmanship of Dr Edison Christian, adding that the University of Lagos has shown interest in improvising NACA’s practice into its curriculum.

She tasked NACA to be unique and see how it can improve on the achievements of China in Acupuncture, saying that every culture had its uniqueness.

Meanwhile, the Registrar of Lagos State Traditional Medicine Board, Mr Olorunkemi Kadiku, lauded NACA for staging the event, while drumming support for Acupuncture.

“I am a beneficiary of Acupuncture. When I had serious pain around my body. Plastics looking like needles were installed in different parts of my body and after some weeks, the pains went completely.” He urged NACA to be at the fore front of the struggle, as better days were ahead.

In an address delivered by Dr. Edison Christian, Chairman NACA, he urged government at all levels to key into insurance scheme for clinical acupuncture for the people Lagos State and Nigerians who are unable to afford the cost.

“I urge Government and Non-Governmental Organizations(NGOs)to collaborate and support NACA financially and materially in order to sustain its projects for the citizenry.

“This is equally an opportunity to call on Media Practitioners to create a column in their dailies for NACA to present information that will update Nigerians on clinical Acupuncture administration, with a view to promoting tourism and groom of future leaders in science, education and culture which is part of UNESCO goals.

“NACA is open to collaborations that will impact lives of youths, children and people living with disability (PLWD). The Chairman reaffirmed that Acupuncture Awareness is one of the Sustainable Development Goals (SDGs) of UNESCO that brings Presidents of Nations to a roundtable during the United Nations General Assembly (UNGA) to chart a course forward every year.

“I seize this medium to reaffirm NACA’s solidarity with the United Nations Climate Change Policy Covering at COP27. I enjoin both the Federal and State governments of Nigeria to enlist NACA members (Clinical Acupuncturists) regulated by Lagos State Government Traditional Medicine Board Ministry of Health into a payroll salary scheme in government hospitals.

“The Nigeria Bureau of Statistics (NBS) should also champion data of acupuncturists on their website. NACA calls on President Muhammad Buhari and Governor Sanwo-Olu of Lagos State to sponsor the 13th edition of UNESCO programme on World Acupuncture Awareness Day in 2023.”

Dr. Christian also calls on medical practitioners in Natural Medicine Practice, Integrative Medicine practice, Alternative Medicine or TCAM practices to be sensitive to white elephant promises and key into NACA project, policymaking and be fully integrated into Lagos State Government Traditional Medicine Board Ministry of Health, which is where the future lies.