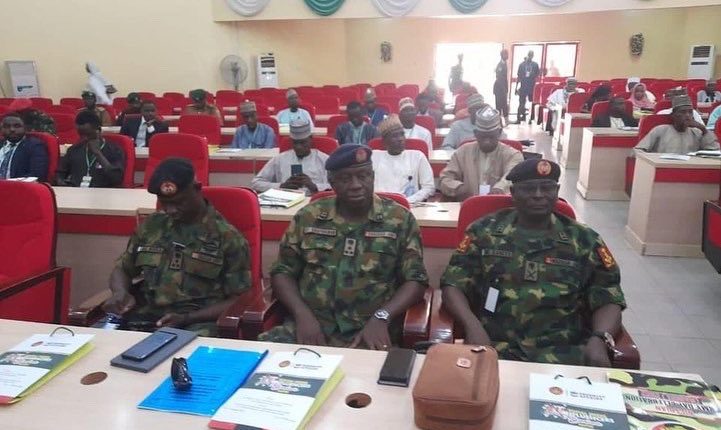 This is part of efforts to bridge information gap and eradicate the menace of fake news syndrome between the Nigerian Army (NA) and Social Media influencers & Online Bloggers and Civil Society Organizations.

The theme for the seminar which is “The Nigerian Army’s Non Kinetic Lines of Operations Critical Role of the Social Media” is targeted at getting feedback from online communities and hosted twice every quarter of the year in some selected states across the country.

Speaking during the event, the Chief of Army Staff (COAS) Lieutenant General Faruk Yahaya, represented by the Chief of Civil-Military Affairs (CCMA), Major General MG Kangye stated that; “the social media seminar is a medium used by the NA to interact with the civil populace, in order to foster Civil-Military Cooperation and leverage on social media to enhance it’s operations positively.“

The CCMA further stated that “social media is not only  a veritable  tool in influencing and shaping public opinion, it also serves as an avenue for Social Media influencers and Online Journalists as well as Civil Society Organizations to know and enlighten the general public on the dangers of misinformation and misinterpretation.“

He thereafter thanked the COAS for providing the financial resources to conduct the seminar.

The Seminar which was interactive featured lectures on the topics “Leveraging the Social Media in Support of Nigerian Army’s Non – Kinetic Lines of Operations” delivered by Barrister Baffa Alasan and “Enhancing Civil Military Cooperation in Joint Operations Environment: The Role of Social Media” delivered by Brig Gen EF Oyinlola.

The Chief of Civil Military Affairs (CCMA) charged all the participants to be good ambassadors of the country and shun all forms of violence so as to maintain a peaceful atmosphere.