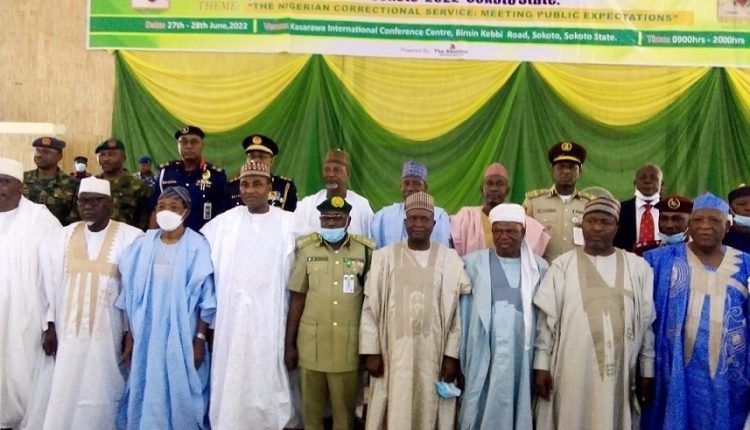 Nigeria’s Ministry of Interior says President Muhammadu Buhari’s administration has remained committed to ensure the safety of  Correctional Centres across the country.

The Minister of Interior, Mr Ra’uf Aregbesola made this known at the opening of a two day Controller General of Corrections Retreat in Sokoto State. .

According to Mr Aregbesola, the Correctional centres suffered several attacks with many inmates freed in a way that it has never happened in the country.

“This tasked us immensely, but I am happy that we came out to be on top of our game. Our facilities are safe and secure now, in and out,” he stated.

The Minister said the retreat was a kind of getaway that organisations usually embark upon for the purpose of bonding with one another and work on one or more specific goals.

Future Goals
He urged the participants to use the retreat opportunity to review their past works and set future goals.

“It is my hope and belief that this retreat will be a watershed for the NCoS in reviewing their past, set new goals and prepare to serve the nation like never before,” the Minister noted.

Aregbesola explained that the Nigerian Government has put in place policies for decongesting Correction Centres where thousands of inmates were released on compassionate ground.

“We started work on the idea of compiling the list of convicted inmates serving light terms for not too serious offences, who were in custody because they could not pay their fines.

” if we could get well-to-do Nigerians to pay their fines, they would be released and more space would be freed at the custodial centres for easy decongestion,” the Minister noted.

The Minister however said he hope that the progress would be considered as a serious issue and the modalities for the implementation at the retreat.

He thanked President Muhammadu Buhari for his continuous assistance and favourable disposition to the Interior Ministry and its agencies.

Mr Aregbesola commended the Controller General of Corrections Service, Mr Haliru Nababa, and his staff for their sacrifice, diligence and patriotism.

In his remarks, the Controller General of Correctional Service, Haliru Nababa, described the retreat as unique, timely and imperative, considering the security challenges in the country.

He said the retreat was aimed at drawing a five year direction for the service in line with the Ministerial retreat held in Ilorin, Kwara State, in 2021.

“My policy thrust targets a safe, humane and effective custodial and non-custodial service as well as staff welfare and capacity development.

“This retreat is expedient as it offers stakeholders a valuable opportunity to rub minds and frankly discuss issues, challenges and prospects in and around Nigerian Correctional Service,” Nababa said.

Nababa applauded the Minister of Interior, Mr Ra’uf Aregbesola, for providing the needed support and direction for the smooth operations of the Nigerian Correctional Service.

Declaring the retreat opened, the Sokoto State Governor, Aminu Waziri Tambuwal, commended the Nigerian Correctional Service for organizing the retreat at this trial moment of security challenges face by the country.

Tambuwal said he hoped the retreat would explore more avenues for resolving various challenges faced by the service.

He urged the participants to use the experience acquired during the retreat to uphold the standard of Correctional centres across the country.

Governor Tambuwal was represented by his Deputy, Manir Dan’iya.

The retreat was attended by Ministers of Police Affairs and Justice Maigari Dingyadi and Abubakar Malami, (SAN), former Minister of Interior, Abdurrahman Danbazzau, National Assembly members, Stakeholders and among others.

The theme for the Retreat is; “the Nigerian Correctional Service: Meeting Public Expectations.”