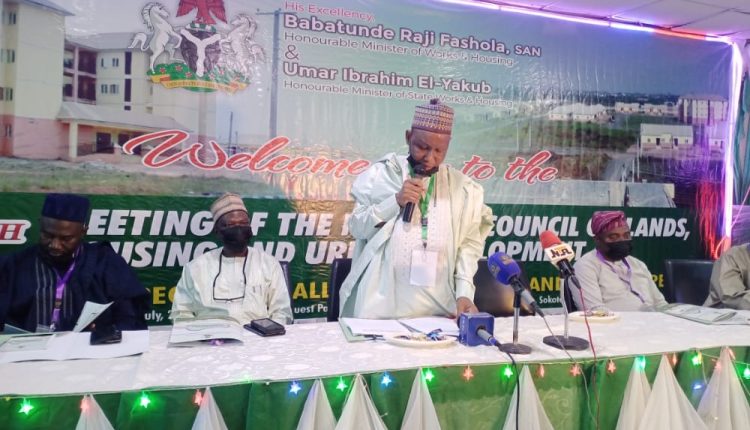 Nigerian Government has said its ready to partner stakeholders to address housing deficits for the overall development of the country.

The Director, Planning Research and Statistics in the Federal Ministry of Works and Housing, Mr. Jide Ode-Martins, made this known at the 11th meeting of the National Council on Lands, Housing and Urban Development in Sokoto State.

Mr. Ode-Martins said this year’s theme: ”Housing Our People, by All of Government and All Our People’‘ was chosen in a bid to further address the housing needs of all Nigerians.

Livestream of the 11th Meeting of the National Council on Lands Housing and Urban Development on YouTubehttps://t.co/pl7xXLiVzZ

He said it was chosen in recognition of the collective efforts to address the challenges in the housing sectors.

”Federal Government alone cannot address the gab in housing development across the country which brings to focus the fact that state governments and private sector as critical stakeholders.

”It was aimed to have maximum collaboration to address the housing challenges by bringing to the forefront desirable strategies to increase the stock of affordable houses to Nigerians,” Mr Ode-Martins said.

He added that the meeting would be preceded by 2-day technical meeting of Directors, Heads of agencies and professional bodies in building sector.

According to him, stakeholders would fine-tune the recommendations which would be from necessary provisions on various institutions toward adequate housing infrastructure by governments and private sector.

Engineer Moyi Tambuwal said the event is timely and demonstrated commitments to provide houses to all categories of Nigerians.

According to him, the administration of Governor Tambuwal remain committed to ensuring the provision of affordable housing to all Sector in the state.

The event was attended by representatives from 36 states of federation, building industries, associations in building sector and higher institutions.