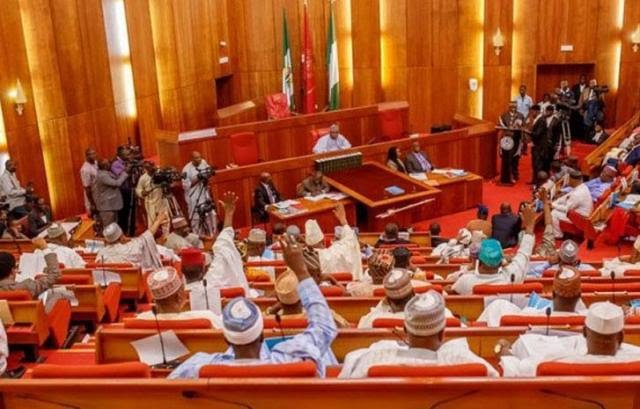 Last updated Nov 24, 2022
0 235
Share
The Nigerian senate on wednesday stepped down the request of Kebbi state government for the refund of seven billion naira which it spent on rehabilitating federal roads in the state.
Senate position was sequel to the consideration of a report of its committee on local & foreign debts, on the promisory note programme and bond issuance as refund to some state governments for projects executed on behalf of the federal government.
The requests by Taraba & Yobe states were approved by the senate while that of Kebbi was stepped down because no representative of the state government appeared before the senate to defend their claim.
Presenting the report on Wednesday, chairman of the Senate Committee on Local & Foreign debts, Senator Clifford Ordia, noted that, “Kebbi state’s request for a refund was stepped down because they failed to appear before the committee to defend their claim”.
Kebbi Senators; Mohammed Aliero, Yahaya Abdullahi, & Bala Ibn N’Allah, all supported their states’ request for a refund of the expenditure incured on behalf of the federal government but demanded that senate rules must be followed.
“We cannot go against the state government in its quest to have this huge amount of money refunded because our state badly needs the money. However, the senate is an institution that we all have worked hard to build, & so, will not want to support any thing or action that undermines the senate rules & tradition.”
Thereafter, President of the senate Ahmad Lawan, urged the three Senators to engage with the Kebbi state government to ensure that the matter is resolved.
Senate resolved to give Kebbi state another opportunity to appear before it’s committee within the next two weeks to defend its claim, and have the money refunded by the federal government.
Kebbi StateSenate

Works Ministry Gets N14bn For The construction of Kano Road