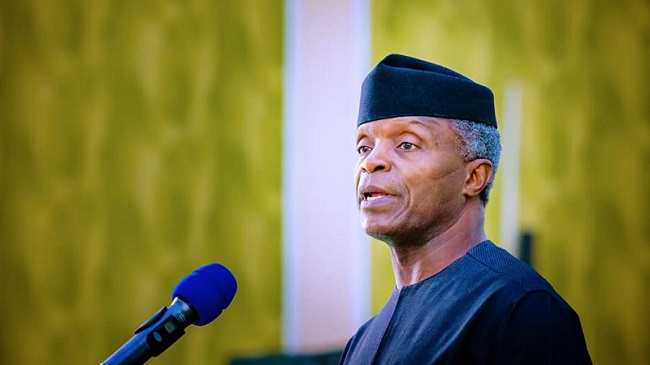 Nigeria’s Vice President, Professor Yemi Osinbajo says the country’s future will be greater than its past, declaring that God’s promises for Nigeria will come to pass.

With various references from the scriptures, the Vice President, who attended the service in the company of his wife, Dolapo, expressed hope for Nigeria’s rise to greatness and prayed for the country, its citizens and leaders.

“The future of Nigeria will be far more glorious, more peaceful than her past and so shall it be for you too.”

Vice President Osinbajo, who described the independence anniversary as the birthday of the country and its people, said that the prayer he offers to people on their birthdays, which he takes from Deuteronomy 33: 25, is,“As your days, so shall your strength be.”

“So, every prayer and every blessing that we pronounce today on Nigeria we also pronounce on every Nigerian and all of our friends.”

“Brethren, we stand at the gate of a new nation and we see its light shining bright; the nation of God’s promises, a nation of opportunities, of equity and justice, a secure and prosperous nation, a nation of laws and righteousness.

“Even if what we see today seems bleak and dark, we are confident that God who owns the heavens and the earth will fulfil its promises concerning this nation.

“And indeed he says in Joshua 21:45 ‘not a word failed of any good thing which the Lord has spoken to the House of Israel.  All came to pass.’

“We pronounce concerning this nation that not a word will fail regarding any good thing which the Lord has spoken to Nigeria.”

The President, Christian Association of Nigeria (CAN), Daniel Okoh, in his sermon titled, ‘The righteous shall rule the land,’ said Christians must“Continue to speak up and stand up against injustice and work for peace in a constructive way so that we shall enjoy the pasture of the land.”

Okoh said that despite the political instability that Nigeria witnessed in the past, the country has continued to deepen its democracy since 1999.

The cleric said that Nigeria is still “Bedevilled by insecurity, kidnapping, unnecessary killing and decapitation of innocent citizens, diminishing value of human life and social injustice that has put many in distress and has made many citizens angry.”

He admonished Nigerians not to lose hope because of the way the wicked seemed to be succeeding in their actions.

“For many it appears that the wicked are winning all, taking all and enjoying all.

“Many are worried and even afraid that the wicked is about to take over the rulership of the land as we witness desecration of worship places, violent threat to the seat of political power, cheating, blatant stealing of our oil, flagrant degradation of our human environment, denial, betrayal, rejection and outright exclusion in many areas of our existence as a nation.

“It seems the wicked is having its way by making fortunes out of evil practices with impunity; and terrifying the upright, the pure, the meek, the voiceless, the honest and the hardworking individuals in our society.

“However, in the midst of all these, there is hope. How should we respond to this present situation? The bible tells us that the kingdom of Israel in King David’s time passed through difficult times in the land that God gave to them to inherit as we experience today in Nigeria. God took them out of the house of bondage in Egypt, gave them freedom and brought them to the land of Canaan.”

The CAN president also advised Nigerians to ensure that they exercise their rights by voting in the 2023 general election in Nigeria.

Stakeholders advocate for compliance to standards of building