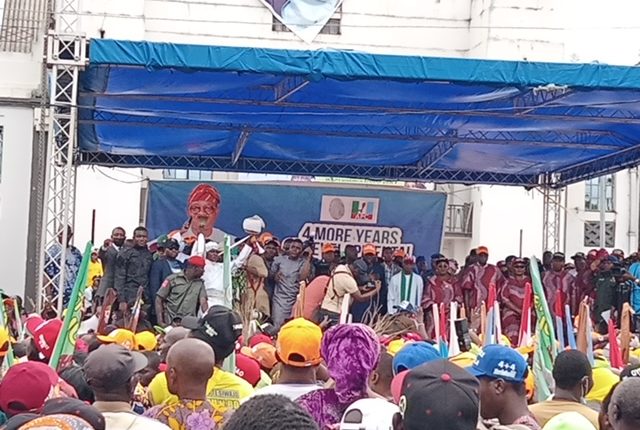 This is as Governor Oyetola’s re-election campaign moved to Ijesa-South Federal Constituency.

Oba Aromolaran, who is the paramount ruler of Ijesaland, said his confidence sprang from the excellent performance of the governor in the last three and half years.

He said one couldn’t do such good work as Oyetola had done, putting in so much effort and not get a second term, adding that his re-election was a done deal.

The monarch lauded Governor Oyetola over his multi-sectoral achievements in the state, noting that he was pre-eminent among all the candidates owing to his track record.

He said: “You are the incumbent Governor, but you have proved yourself with your satisfactory performance. You have not disappointed us in any way, and your emergence is not doubtful, especially among my people.

“We are not known for dilly-dallying in our collective history, and it won’t start in our disposition towards you. In other words, we will not disappoint you.

“We are united with you in purpose and developmental intentions, and that is why we are standing by you now, and we will stand by you with our votes.

“The whole of Ijesaland and Osun are proud of you because you are a true Excellency who knows the value of education, good health system, and other critical indices of development. I don’t want to talk too much than to thank you”, Oba Aromolaran added.

Oyetola, while addressing a crowd of supporters and residents on the campaign ground, urged them to be wary of the strategy deployed by politicians to intimidate voters, stressing that no anti-democratic scheme would stand in the forthcoming election.

He reassured the electorate of their safety before, during and after the election, saying necessary mechanisms would be put in place to ensure a hitch-free electoral process.

Governor Oyetola tasked loyalists of the All Progressives Congress (APC) to double their efforts at mobilizing the electorate, urging the people themselves  to collect their Permanent Voter’s Cards in order to be able to participate in the upcoming election.