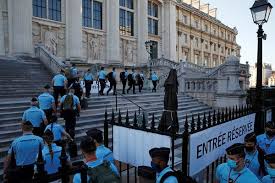 The trial of suspects in the attack that killed 130 people across Paris in 2015 will come to an end on Wednesday when judges hand in their verdict, in what victims said will be a relief after nearly 10 months of harrowing hearings.

In the “deadliest attack” ever seen in peacetime France, Islamist gunmen ‘struck’ the Bataclan music hall, six bars and restaurants and the perimeter of the Stade de France sports stadium on the evening of Nov. 13, 2015.

The hearings allowed victims to testify in detail about their ‘ordeal’ and their struggles in overcoming it, while families of those killed spoke of how hard it was to move on. Some of the accused apologised or took responsibility for their role in the attacks.

“It has been a long 10 months but I think we can be proud of what we achieved,” said Arthur Denouveaux, a survivor of the Bataclan attack, in which 90 died, and the president of Life for Paris, a victims association.

“Victims, myself included, we had very low expectations for the trial,” Denouveaux told Reuters. “The trial overcame anything we would have wished for, because terrorists spoke, terrorists in a way answered to our testimonies, that was so unexpected, that never happens in terrorist trials.”

Salah Abdeslam, the main suspect, who faces possible life imprisonment without parole, started the trial by proudly saying he was a “soldier” of Islamic State, which has claimed responsibility for the attacks, but later apologised to the victims.

“When Salah Abdeslam decided to speak to apologise, I don’t know if it was genuine or not but still he felt he had to do the effort, so that counts,” Denouveaux said.

Abdeslam is the only surviving member of the group suspected of carrying out the attacks.

Thirteen other people, 10 of whom are also in jail, were also in the courtroom, accused of crimes ranging from helping provide the attackers with weapons or cars to planning to take part in the attack. Six more were judged in abstentia.

The verdict and sentencing are expected from 1700 (1500 GMT) on Wednesday, with no details on what time exactly that will come. The ruling can be challenged on appeal.

“I feel relieved that the trial is over,” Denouveaux said, “because it means justice has done what it has to do and because it means this trial is behind me and I can move on with my life.”