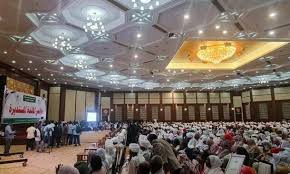 The round table conference of the ”People of Sudan” conference initiated by the religious figure al-Tayeb Aljid, recommended that the would-be-established Supreme Council of the Armed Forces be given broad powers, including sovereign powers, to be the supreme authority in the country.

The conference ended its sessions on Sunday, after two days of discussions on many issues amid a broad boycott by the Forces for Freedom and Change (FFC) National Consensus coalition, Sudanese Communist Party and Resistance Committees, the spearhead of the anti-coup protests.

The military-backed initiative mainly involved the dignitaries of the former regime from the banned National Congress Party (NCP) and their allied groups. All of them hailed the coup and expressed their political support for the military leaders who are perceived as their saviours.

“The conference defined the structures of the transitional period so that the Supreme Council of the Armed Forces is the supreme authority entrusted with defending Sudan and its people, protecting national security and constitutional order, as well as assuming sovereignty duties,” provides the final communiqué read at the closing session.

While a cabinet of technocrats will assume executive duties, adds the statement.

Also, the conference refused the appointment of Sudanese holding a foreign nationality as prime minister.