Nigeria staged a first-half comeback to hand Jose Peseiro his first win as head coach, beating Sierra Leone 2-1 in their opening Group A game of the 2023 Africa Cup of Nations (AFCON) qualifiers, courtesy of goals from Alex Iwobi and Victor Osimhen at the Moshood Abiola National Stadium in Abuja.

The hosts started with Osimhen and Umar Sadiq in attack, with Moses Simon and Samuel Chukwueze supporting on the flanks. Sierra Leone came out with a front-three of Musa Noah Kamara, Mohamed Buya Turay and Jonathan Morsay as the visitors looked to cause an upset. 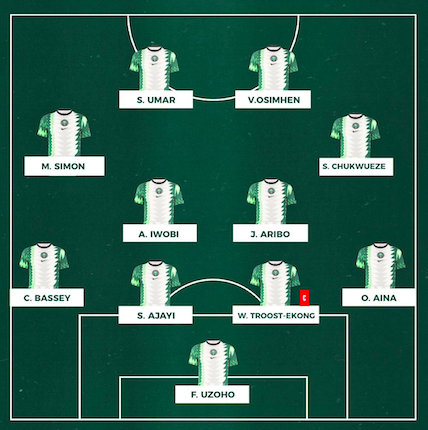 The Leone Stars started promisingly with a good chance falling to Turay, but his effort was tipped over the crossbar by goalkeeper Francis Uzoho in the fourth minute. However, the Leone Stars opened the scoring seven minutes later when Morsay’s diving header from a cross beat Uzoho.

Sierra Leone came very close again in the 15th minute as Turay had his shot come off the goalposts following a swift counter attack.

Nigeria regained their composure and got the equalising goal in the 16th minute after a fine piece of play. Iwobi got his name on the scoresheet as his beautifully placed shot beat goalkeeper Mohamed Kamara after being set up by Moses Simon.

The pitch caused the Super Eagles lots of problems with the uneven and unpredictable bounce of the ball. Defender Semi Ajayi almost gifted Sierra Leone a goal in the 35th minute when he mis-controlled a ball in the box, but the Eagles counted themselves lucky.

The Super Eagles continued to press and were rewarded in the 41st minute when Osimhen got onto a headed pass from Simon, and fired the ball into the roof of the net.

At the start of the second half, Peseiro made a change with Oghenekaro Etebo coming on for Sadiq as the Super Eagles looked to get more control of the midfield.

Sierra Leone created a few chances, but were unable to break the resilient defence of the Nigerians.

Moffi came on for a limping Osimhen a minute into added time as the Super Eagles looked to reinforce the defence to preserve the scoreline. However, the game finished 2-1 in favour of Nigeria as they kicked off their 2023 AFCON qualifiers with a win in what was a well-contested match against their West African opponents.

“We created a lot of scoring chances, we could have won with a bigger margin, but the team needs more time and we must work,” Super Eagles head coach Jose Peseiro said after the match.

“We are better than Sierra Leone in this game, we deserve to win. We changed the setup in the second half, I think it was only the last 10 minutes our opponent had some good moments.”

The Super Eagles score twice in the first half to earn their first 3 points in their #TotalEnergiesAFCONQ2023 campaign @NGSuperEagles | @SLFA_sl pic.twitter.com/MmHgIYOUS0

The Super Eagles will face Sao Tome and Principe next in their 2023 AFCON qualifying campaign at the Grand Stade de Agadir in Southern Morocco on the 13th of June, 2022.