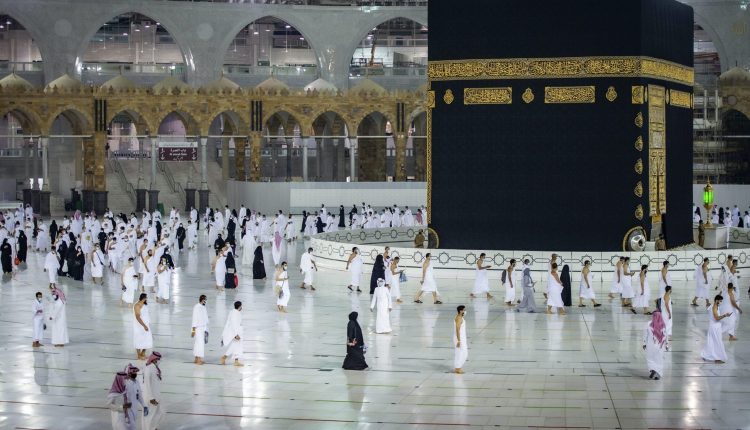 For the first time in the last two years, Muslims will physically observe the annual Islamic pilgrimage of Hajj in Makkah, Saudi Arabia.

The resumption in this year 2022 of the physical observance of the rites of Hajj, brings to a formal end the suspension of in-person observance of the rites, which was enforced in the wake of the COVID-19 pandemic as declared by the World Health Organisation, WHO in 2020. Already, Muslims have begun converging on Makkah in Saudi Arabia for the annual Hajj pilgrimage.

Undoubtedly, the COVID-19 pandemic has disrupted nearly all aspects of life. This is especially so for the annual religious pilgrimages of peoples of all faiths.

Though the pandemic has abated in many parts of the world, the World Health Organisation cautions against complacency and recommends precautionary measures to avert a resurgence, especially as countries around the world lower their alert levels to allow for a resumption of some normal physical activities, like pilgrimages.

Hajj is one of the five pillars of Islam that entails an adult pilgrim traveling to Makkah, regarded as the holiest city for Muslims, at least once in a lifetime. The pilgrim is however, required to be physically and financially capable of undertaking the journey and supporting his or her family at home.

The pilgrimage itself is a demonstration of the solidarity of believers in their submission to Allah and gratitude to the Creator for the opportunity to perform Hajj in a life time.

The word Hajj derives from the name of the 12th month of the Lunar circle, Dhul Hijjah, in which Hajj is performed. It connotes the outward act of sojourning and the inward act of intending the observance of the key practices and processes mandated for the act to be deemed completed by a pilgrim.

The formal rites of Hajj pilgrimage are performed within six days; starting from the 8th to the 13th of Dhul-Hijjah, by all pilgrims simultaneously in locations within and around Makkah. Though first performed by the Prophet of Islam, Muhammad (Peace Be Upon Him) in the 7th Century AD, the pilgrimage to Makkah dates back thousands of years to the time of the Prophet Ibrahim (Abraham).

Each pilgrim is required to join processions of millions of people to walk briskly seven times counter-clockwise around the Ka’aba, the cube-shaped building and direction of prayer for Muslims, walk back and forth between the hills of Safa and Marwah seven times, drink from the Zamzam Well, go to the plains of Mount Arafat to stand in vigil, spend a night on the plains of Muzdalifah and perform three times, a symbolic stoning of the devil by throwing pebbles at three pillars in Jamrah.

At the end of the rites of Hajj, male pilgrims are required to either shave or trim their hairs while the female pilgrims trim just the ends of their hair. Successful completion of the Hajj rites is then followed with the slaughtering of an animal as sacrifice, to mark the start of the four-day global festival of Eid al-Adha.

Before COVID-19 pandemic, official statistics for the years 2000 to 2019 shows that more than 2.49 million Muslims perform Hajj each year, comprising pilgrims from countries around the world and residents within the Kingdom of Saudi Arabia.

To mitigate the risk of person-person transmission of COVID-19 especially given the huge crowds during annual pilgrimages, the Saudi Arabian government suspended Hajj bookings for the years 2020 and 2021. The Kingdom also suspended congregations for the five daily and Friday prayers in the two grand mosques of Makkah and Madinah, especially at the peak of COVID-19.

These policies and several other crowd-control measures, served to significantly reduce the spread of the disease and hastened the current return to normalcy in Saudi Arabia.

For this year, only one million pilgrims from all countries of the world have been approved to perform the 2022 Hajj, including those within the Kingdom, compared to the 60,000 pilgrims in 2021and less than 1,000 for 2020 Hajj.

Furthermore, only pilgrims below the age of sixty five years who have been fully vaccinated against COVID-19, with a negative PCR test result taken 72 hours before departure from country of origin to Saudi Arabia, are allowed to participate. All pilgrims must also comply with all COVID-19 protocols, including the compulsory use of face masks indoors and outdoors.

In addition to providing general medical support to pilgrims, each country’s medical team is also required to provide isolation centers in clinics in Makkah, Madina and other critical locations during this year’s Hajj.

Instructively, as pilgrims prepare for the commencement of the 2022 Hajj rites proper, Muslims and indeed, people of all faiths, continue to pray for global security, protection and good health, so that the world may never again experience the likes of the COVID-19 pandemic and the disruptions it caused to the practice of religious obligations.