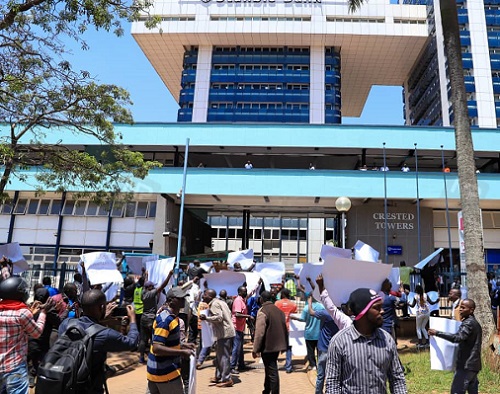 A small group of placard-carrying protesters has gathered outside the European Union offices in Uganda’s capital, Kampala.

The protesters express displeasure over EU call to the country to end a strategic oil pipeline project with neighbouring Tanzania.

“EU respect Africans and their resources,” one placard reads, “our oil is our hope,” says another.

Last week the EU parliament passed a resolution warning of human rights abuses and the social and environmental risk posed by the project.

Rights groups say some 100,000 people risk being displayed and have urged the contractors, France’s Total Energies and the China National Offshore Oil Corporation, to pause the $10bn project until they find an alternative route.

The authorities in Tanzania and Uganda have criticised the EU’s opposition to the project.

Uganda’s President Yoweri Museveni said nothing would stop the project.

“I saw in the papers that the EU parliament passed a resolution directing Total not to proceed with the East African Crude Oil Pipeline. Please, don’t waste your time thinking about that. We have a contract with Total written very well. The oil will come out in 2025, the first batch. The oil project will go on and no one can stop it,” the president said

The East African Crude Oil Pipeline project is expected to stretch 1,443km (896 miles) from Lake Albert in western Uganda to the Tanzanian port of Tanga on the Indian Ocean.