Real Madrid beat Eintracht Frankfurt 2-0 on Wednesday courtesy of goals from David Alaba and Karim Benzema to lift the UEFA Super Cup trophy for a record-equalling fifth time at the Olympic Stadium in Helsinki, Finland.

The UEFA Super Cup  is a competition where the winners of the UEFA Champions League and Europa League face each other.

The Spanish club opened the scoring in the 37th minute when David Alaba tapped the ball into an empty net, after Casemiro had headed the ball back across goal from a tight angle.

In the second half Frankfurt looked to find its way back into the match, but couldn’t quite find a way past Madrid’s resilient defence.

Madrid continued to dominate as Casemiro struck the bar with a powerful left-footed drive, just before Benzema doubled Real’s lead. The French striker connected with a Vinicius Junior cross to beat goalkeeper Kevin Trapp from just inside the area.

Benzema’s strike saw him become Real Madrid’s second-highest goalscorer of all time (324), ahead of Raul (323) and behind Cristiano Ronaldo (450).

The goal all but took away any glimmer of hope the German side had as Madrid were determined to continue its dominance in European football. 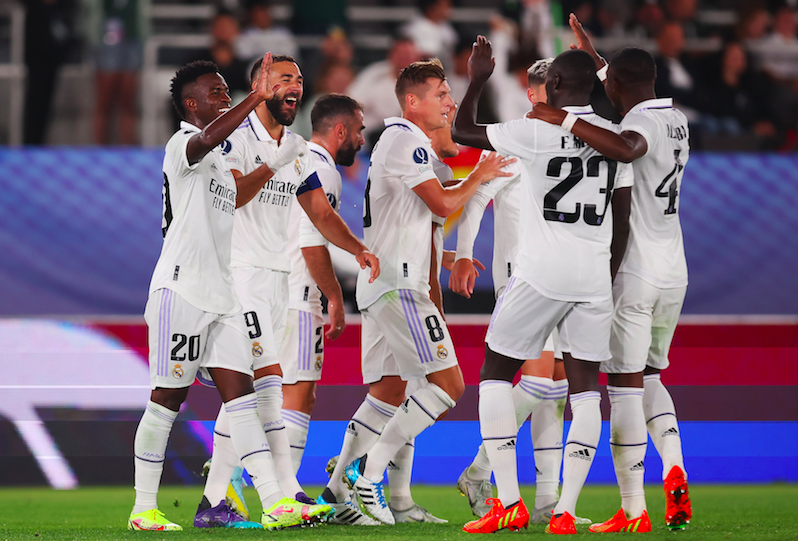 Eintracht Frankfurt’s poor start to the season continues after they were beaten 6-1 by Bayern Munich in their opening Bundesliga match last weekend.

Real Madrid will begin the defence of their La Liga title when they travel to Almeria on Sunday, while Eintracht Frankfurt will face Hertha Berlin away from home in the Bundesliga on Saturday.