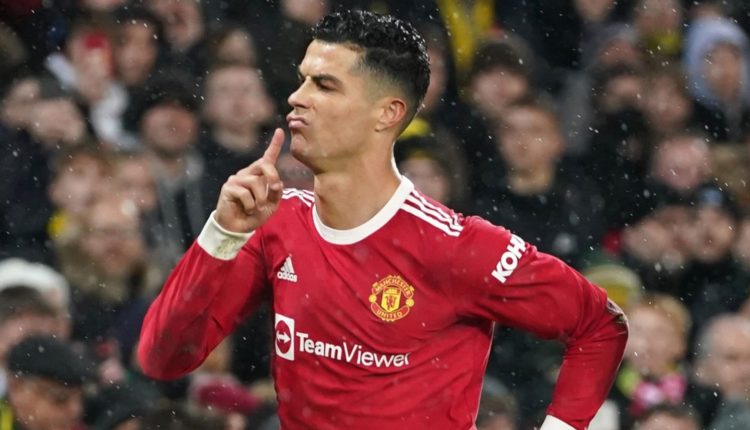 Ronaldo wins Premier League player of the month for April

Cristiano Ronaldo has been named as the Premier League’s Player of the Month for April 2022.

Despite a mixed time of it on the pitch for the Reds, the 37-year-old scored five goals in his four top-flight appearances for Manchester United last month, including a stunning hat-trick against Norwich City at Old Trafford which helped us to a dramatic 3-2 victory.

A consolation strike at Arsenal in a 3-1 defeat to the north Londoners followed and that was Ronaldo’s 100th Premier League goal – the Portuguese became only the fourth United player to reach a century in the division for the club, after Ryan Giggs, Paul Scholes and Wayne Rooney.

Goal no.101 soon followed, as Ronaldo powerfully volleyed home at the Theatre of Dreams to secure a 1-1 draw against Chelsea in our final game of April.

Cristiano ran away with our own Player of the Month prize, having netted all but one of our goals during April – Fred’s equaliser against Leicester, a game Ronaldo missed through illness, was the outlier.

It’s the second time CR7 has won the Premier League accolade since he returned to English football in the summer, as he also came out on top in September, following a headline-grabbing second debut in the 4-1 thrashing of Newcastle United.

Ronaldo has now won six Premier League Player of the Month awards in total, placing him level with Steven Gerrard and behind only Sergio Aguero and Harry Kane on the all-time list.

The Portuguese star was deemed the league’s best player in November and December 2006 and was also presented with the trophy for his displays in January and March of the 2007/08 campaign.

Int’l nurses Week: WHO raises alarm over shortage of nurses

Ebonyi Government to empower women and Youths with N2.6 billion