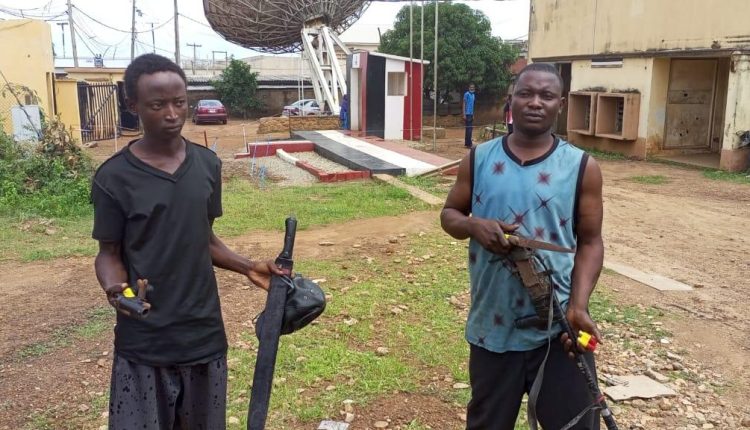 The Kwara state command of the Nigeria Security and Civil Defence Corps (NSCDC) has paraded two suspected bandits with dangerous arms in their possession.

The Public Relations Officer (PRO) of the command, Olasunkanmi Ayeni, told journalists while parading them that the suspects were arrested at a location close to a gold mining site at Agbede village in Moro local government area of Kwara state with a locally made pistol and riffle, among other dangerous weapons.

The Corps’ PRO, who identified the suspects as Abdulahi Alhaji, 19 years old from Kaduna State and 39 years old John Ihenka, said that the suspects were capable of using the arms in their possession to perpetrate different kinds of crimes in society.

“We are all aware of the security situation and banditry around us. This command has been working so much not to allow these bandits to infiltrate our state.

“Alhaji was trying to get a cartridge for the local pistol he said he had bought for N8, 000 and fortunately he asked questions from the wrong person. From this process, we were able to trail him, leading to his arrest.

“It was the arrest of Alhaji that led to that of John, who sold the local pistol to him. On getting to John’s place, the officers in the intelligence unit were able to get this rifle from him and other dangerous weapons.

“We know that no one has the right to own a local pistol or local riffle. The highest is the one which is licensed by Nigeria Police. Keeping this with them, one should understand what they may be using it for.

The corps, therefore, implored members of the public to always furnish it with useful and timely information so that all will live in peace and secure environment.