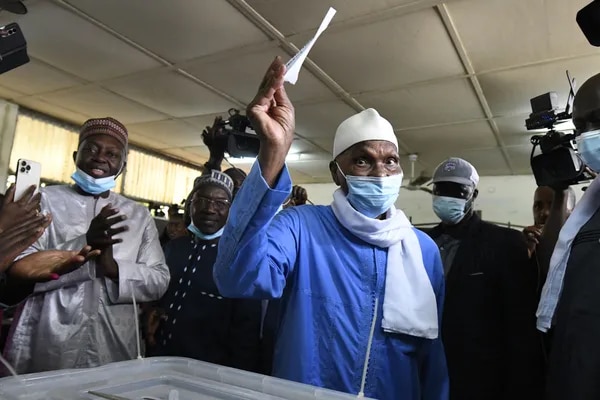 Around seven million voters were eligible, but turnout appeared to be low at only 22% around midday.

Results are expected on Today.

The political backdrop in the country of 17.5 million, considered among West Africa’s most stable democracies, has become increasingly acrimonious, fuelled in part by Sall’s refusal to rule out breaching term limits to run in 2024.

Violent protests erupted last year after Sall’s main opponent, Ousmane Sonko, was arrested on rape charges. Sonko, who came third in the last presidential election in 2019, denies the allegations and says they are politically motivated.

Protests broke out again last month after the main opposition coalition’s primary list of parliamentary candidates, which included Sonko, was disqualified on technical grounds. As a result, the coalition’s backup list – consisting mostly of relative unknowns – will be on the ballot.

Sall’s ruling Benno Bokk Yakaar coalition will be trying to conserve its majority of more than three-quarters of parliamentary seats.

Sall swept to power in 2012 and was elected again in 2019. He has campaigned on big-ticket construction projects such as a high-speed train line and a conference centre, as well as oil and gas production.

His opponents have seized on growing frustrations with economic hardship caused by the coronavirus pandemic and rising fuel and food prices.

Sall’s refusal to publicly rule out a candidacy in 2024 has stoked fears he will follow in the footsteps of Ivory Coast President Alassane Ouattara and former Guinea President Alpha Conde.

Both men stood for and won third terms in 2020 by arguing that new constitutions had reset their two-term limits.

Senegal adopted constitutional revisions, which among other things reduced presidential terms from seven to five years, in 2016. Sall has declined to comment on his intentions for 2024.