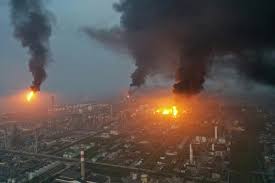 Fires at a large chemical plant in the Chinese city of Shanghai have killed at least one person.

They broke out around 04:00 on Saturday (20:00 GMT Friday) at one of the country’s largest refining and petrochemical plants.

“Flames could be seen engulfing parts of the sprawling complex and spewing thick columns of black smoke into the sky.”

The cause of the fires, which affected an ‘ethylene glycol’ facility, is still unclear.

Sinopec – the state-owned company that operates the plant in the suburb of Jinshan – said “the driver of a transport vehicle had been killed and a company employee had been injured.”

Shanghai’s fire department dispatched more than 500 personnel to the scene.

State media say the fires are now “under control” but protective burning is being carried out.

Sinopec said “it was monitoring for environmental impact” and no damage to the surrounding water environment had been recorded.

Sadio Mane to join Bayern from Liverpool in £35m deal