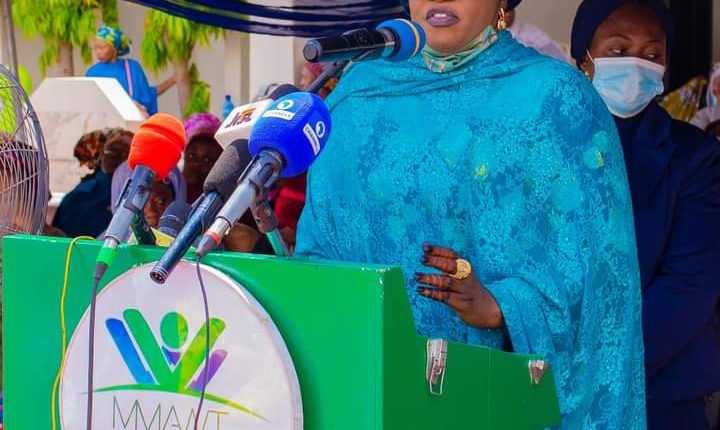 The Wife of Sokoto State Governor, Mrs. Maryam Aminu Waziri Tambuwal, has interacted with different vulnerable groups as part of activity marking the 2022 16 Day of Activism to end Gender Based Violence (GBV).

Addressing the groups, Mrs. Tambuwal appreciated the Sokoto state government and the state House of Assembly for ensuring the successful enactment and signing of the Child Right Act and Violence Against Person Prohibition (VAPP) laws in the state.

Mrs. Tambuwal said United Nations set aside December every year to commemorate the day and re-strategise on how to tackle the menace.

“This activism is an avenue to encourage our collective engagement toward addressing the prolonged violence on us.

“We have gathered here as one entity, without any political, religious and ethnic difference, but to face our collective enemy.

“GBV is a menace that requires collective approach, as such we should sustain our unity to ensure we succeed in the struggle to end the menace,” Mairo Tambuwal said.

She added that Gender Base Violence was categorized into either emotional, physical or intellectual that affects development in the country.

Mrs Tambuwal, the founder of Maryam Mairo Aminu Waziri Tambuwal (MMAWT) Legacy Initiative thanked the traditional and religion leaders for supporting her activities in the state.

In her remarks, the state’s Commissioner of Women and Children Affairs, Hajiya Kulu Sifawa, commended the wife of the Governor for her initiative and support toward addressing Gender Based Violence, GBV in the State.

“As we are all aware, there is no nation that will excel with violence against women and children.

“This menace has continued to negatively expose our desire of having a greater future generation and the best country our children deserve.

“As such motivated the present activity and many of its kind to ensure more enlightenment toward building the best future of our country,” Sifawa said.

She noted that the administration of Governor Tambuwal has given more priority to women especially in appointing more women in different positions.

“Governor Tambuwal with his wisdom to address GBV in the state has given more seats to women as Commissioners, Director Generals, Special Advisers among others.

“Tambuwal also ensured that 3 women councilors are elected from the 23 local government areas of the state,” She added.

In a related development, the Wife of the Governor led a road walk as part of activities marking the 16 Days of Activism with the vulnerable groups.

Mrs Tambuwal was accompanied by the wife of the People Democratic Party (PDP) Governorship candidate, Hindatu Ubandoma, as well as Commissioners of Women and Children Affairs and that of Higher Education in the state, Kulu Sifawa and Prof. Aisha Madawaki respectively.

16 Days of Activism to end Gender Based ViolenceSokoto State