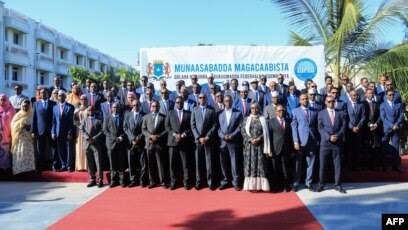 During the vote, several mortar explosions hit the capital.

Somali Parliament Speaker Adan Mohamed Nur Madbe said at a rally in the palace’s highly fortified Villa Hargeisa that 229 MPs voted in favor of the Cabinet, with seven said they voted against and one abstained.

Among the ministers whom parliament endorsed was Mukhtar Robow Ali, known as Abu Munsor – the former deputy leader and spokesman in militant group Al-Shabaab. He is now the religious affairs minister.

Meanwhile, in the town of Jowhar, the capital of Somalia’s Hirshabele state, a bomb blast near a hotel that al-Shabab attacked last month wounded at least five people, including a soldier, two children and two women. No one has claimed responsibility.