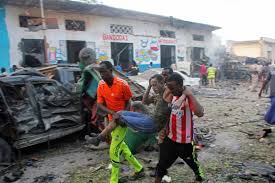 Bomb blasts near the southern coastal town of Kismayo  on Somali has killed at least four people and wounded 11 others.

READ ALSO: Plane Crash-lands in Somalia with Over 40 Passengers Onboard

Authorities in Somalia announced this stating that one of the bomb blasts targeted a minibus carrying civilians in the village of Buulo-haji on the outskirts of Kismayo, the administrative capital of the southern Somali state of Jubaland, resulting in multiple casualties.

Medical sources said that some of the wounded have life-threatening injuries.

Residents explained that after the first explosion that hit the minibus, rescuers who were trying to reach the site were hurt when the second explosion went off.

Authorities blamed al-Qaida-linked Islamist group al-Shabab for the attack, but no one has yet to claim responsibility.

Meanwhile, Somali officials said U.S. forces launched an airstrike at the request of the Somali federal government in the central Hiran region. There was no U.S. confirmation.

Government officials say the airstrike was conducted in defense of Somali National Army forces who, at the time, were conducting counterterrorism operations in the region.

According to a short statement issued by Somali authorities, there were no civilians harmed in the incident and the United States continues to support its Somali partners.