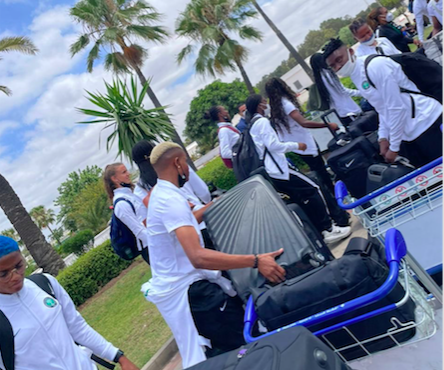 The Super Falcons’ contingent to the 12th Women’s Africa Cup of Nations (WAFCON) landed in Casablanca on Monday and have already moved to Morocco’s administrative capital, Rabat, where the team will camp for seven days before its opening match of Group C against South Africa’s Banyana Banyana.

The Super Falcons of Nigeria will confront South Africa’s Banyana Banyana in their first match of the tournament on Monday, 4th July before other games against Botswana (7th July) and Burundi (10th July).

Super Falcons Coach Randy Waldrum insists the 9-time African Champions, Nigeria, are the team to beat at this year’s edition of the Women’s Africa Cup of Nations in Morocco.

Waldrum also shared his thoughts on the team, his attacking options, Nigeria’s group opponents and more.

All four semi finalists at the WAFCON championship in Morocco will qualify to represent Africa at the 2023 FIFA Women’s World Cup in Australia and New Zealand.

The fifth-placed team at the WAFCON will also have an opportunity to qualify for the World Cup through a Playoff Tournament scheduled for early next year.