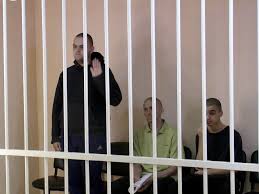 Two Britons and a Moroccan who were captured while fighting for Ukraine and sentenced to death by a court in the self-proclaimed breakaway Donetsk People’s Republic (DPR) are preparing to appeal, Russia’s TASS news agency has reported.

Britons Aiden Aslin and Shaun Pinner and Moroccan Brahim Saadoun were found guilty of “mercenary activities and committing actions aimed at seizing power and overthrowing the constitutional order of the DPR.”

“My colleagues and I are currently preparing the full text of an appeal against the sentence in the interests of our defendants,” TASS quoted Pinner’s lawyer, Yulia Tserkovnikova, as saying.

“Undoubtedly, if the appeal is dismissed and the sentence comes into force, a request for clemency will be filed as this is an inherent right of the defendants, under the legislation of the Donetsk People’s Republic,” she added.