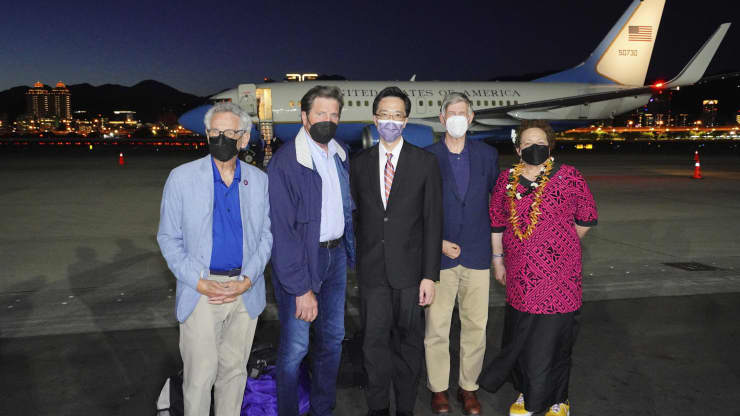 A delegation of U.S lawmakers has arrived in Taiwan for a two-day trip amid growing tensions between Beijing and Washington over Pelosi’s visit and China’s aggressive posturing in the region.

The de facto U.S. embassy in Taipei said the delegation is being led by Senator Ed Markey, who is accompanied by four House lawmakers.

The five-member delegation is expected to meet President Tsai Ing-wen.

The delegation will also meet senior Taiwanese leaders to discuss regional security, trade, investment, and relations between Taipei and Washington.

“Especially at a time when China is raising tensions in the Taiwan Strait and the region with military exercises, Markey leading a delegation to visit Taiwan once again demonstrates the United States Congress’ firm support for Taiwan,” Taiwan’s presidential office said in a statement.

The other members of the delegation are Republican Rep. Aumua Amata Coleman Radewagen, a delegate from American Samoa, and Democratic House members John Garamendi and Alan Lowenthal from California and Don Beyer from Virginia.

China has long claimed sovereignty over the island and has suggested that it will reunify the island.

Taiwan rejects China’s claims and says the island’s people should decide its future.

China’s embassy in Washington said that “members of the U.S. Congress should act in consistence with the U.S. government’s one-China policy”.

The Embassy added that  the latest congressional visit “once again proves that the U.S. does not want to see stability across the Taiwan Strait.”

Markey’s office said the lawmakers in Taiwan “will reaffirm the United States support for Taiwan as guided by the Taiwan Relations Act, U.S.-China Joint Communiques, and Six Assurances, and will encourage stability and peace across the Taiwan Strait.”

China extended military drills and sanctioned Pelosi and her immediate family for her visit to Taiwan earlier this month.

She became the first highest-ranking elected official to visit the island since then-House Speaker Newt Gingrich 25 years ago.

While China’s drills around Taiwan have abated, it is still carrying out military activities.