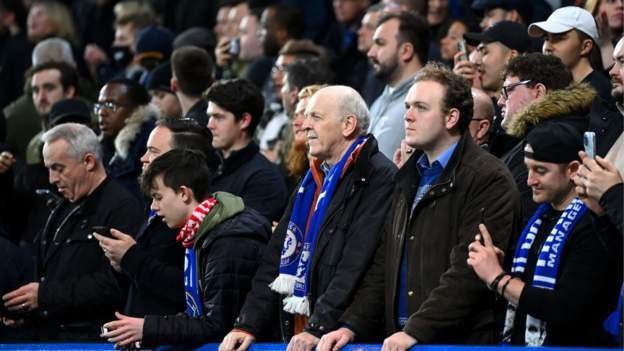 Uefa is to trial safe standing at men’s European club competitions in England, Germany and France during the 2022-23 season.

European football’s governing body will observe standing facilities to see if it can be reintroduced.

It is being limited to countries where safe standing is “authorised and implemented at a domestic level”.

In July, the Premier League and Championship were given the go-ahead for safe standing areas.

The Uefa trial will apply to group stage and knockout rounds up to and including the semi-finals.

“The objective is to assess if and under what conditions standing may be reintroduced in Uefa competitions in a safe manner,” Uefa said.

Chelsea, Liverpool, Manchester City and Tottenham are in the Champions League, Arsenal and Manchester United in the Europa League, and West Ham in the European Conference League.

Safe standing areas have existed at Germany’s top-flight football grounds for a number of years – most famously at Borussia Dortmund’s Westfalenstadion.

Dortmund celebrated the news in a tweet, saying that for the first time their European home games will be attended by 81,365 fans – their usual official capacity for Bundesliga matches.

On 2 January, Stamford Bridge became the first top-flight ground to allow licensed standing in almost 30 years when Chelsea and Liverpool met in a 2-2 Premier League draw.

Designated standing areas had not been seen at Premier League grounds since the adoption of all-seater stadiums in the early 1990s – a recommendation of the Taylor Report following the 1989 Hillsborough disaster that claimed the lives of 97 fans.