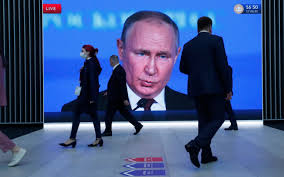 The website of British newspaper The Telegraph has been blocked in Russia, data from state regulator Roskomnadzor shows.

The move follows a request from Russia’s prosecutor general.

Since sending troops into Ukraine in February, Russia has “cracked down on media coverage of the conflict,” introducing 15-year prison sentences for journalists who spread intentionally “fake” news about what it calls its “special military operation” in Ukraine.