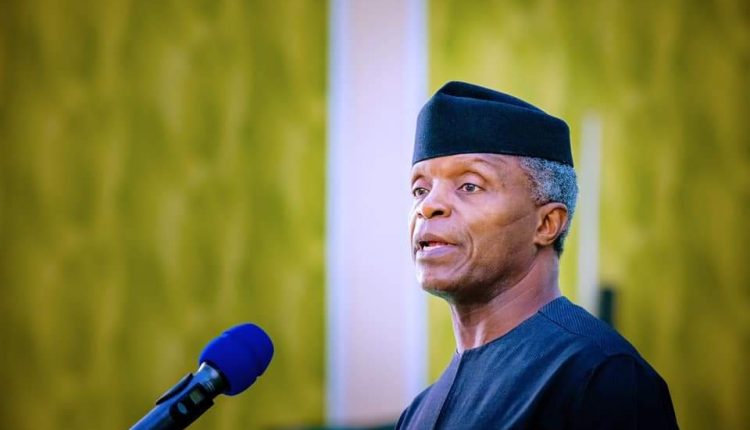 Nigeria’s Vice President, Prof. Yemi Osinbajo has tasked members of Academic Staff Unions of Universities (ASUU) and other relevant institutions to begin a responsive and all-inclusive conversation on funding of university education.

The Vice President disclosed that Nigeria has lost over 50months to strikes between 1999 till date.

Represented by the Secretary to the Government of the Federation, Boss Mustapha, Prof. Osinbajo made these assertions while declaring open, the 60th anniversary of the National Universities Commission and the launch of the Core Curriculum and Minimum Academic Standard (CCMAS), for Nigerian Universities.

He identified funding and University autonomy as two major reasons behind incessant industrial actions by members of the Academic Staff Union of Universities and other Institutions.

Prof. Osinbajo reiterated the place of the National Universities Commission (NUC) as the sole regulator of universities across the country saying professional bodies are to regulate professional practices.

While stressing that Government alone cannot fund education in the country, the Vice President called for development of sustainable model of funding university education.

“I hereby reiterate; The National Universities Commission is the sole regulator of agency of universities empowered by the constitution while professional bodies are to regulate professional practice”

The Vice President called on the Federal Ministry of Education to lead other relevant stakeholders in streamlining the framework of NUC in their engagement with professional bodies for the good of the system.

According the Vice President, the Core Curriculum and Minimum Academic Standard (CCMAS) was developed in collaboration with various professional regulatory bodies.

“It shows that harmony has been achieved in various quality assurance efforts”.

He applauded the foresight of NUC in the unbundling of such disciplines as Agriculture and emergence of three courses namely Allied Health Sciences, Architecture and Communication as well as the media services, the three new courses in Nigerian Universities.

The Minister of Education, Malam Adamu Adamu, commended the role the commission played in the establishment of over 200 universities.

Adamu, who was represented by the JAMB Registrar, Prof. Ishaq Oloyede, said the commission was empowered to ensure the development of university education for the production of quality programmes relevant to national development.

Also, the Executive Secretary, NUC, Prof. Abubakar Rasheed, said that the commission was faced with challenges but was however surmounted.

Rasheed said that the recent time high ranking of universities that featured 48 universities was a testament of the impact of the work done by the commission.

The keynote Speaker, Prof. Steve Smith noted that the commission has grown in structure and influence.

He called for Professional trainings and skills as well as end to issues of discrimination in access to university education to the less privileged.