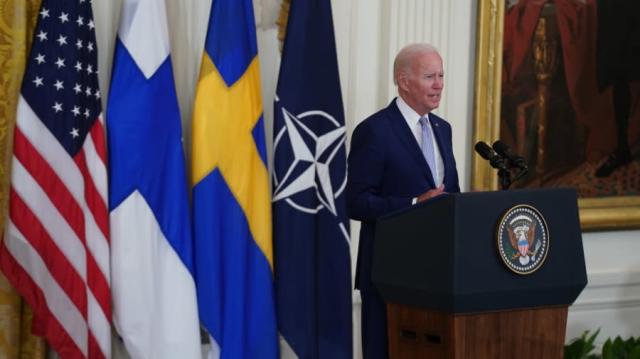 Report says Biden signed the US “instrument of ratification” which is the final step for their endorsement by the United States, welcoming the two countries.

“It was and is a watershed moment I believe in the alliance and for the greater security and stability not only of Europe and the United States but of the world,” he said of their entry into the Post World War Two alliance.

The US Senate backed the expansion by an overwhelming 95-1 last week, both Democratic and Republican Senators strongly approved membership for the two Nordic countries, describing them as important allies whose modern militaries already worked closely with NATO.

Meanwhile, Sweden and Finland applied for NATO membership in response to Russia’s Feb. 24 invasion of Ukraine. Moscow has repeatedly warned both countries against joining the alliance.

Putin is getting “exactly what he did not want,” with the two countries entry into the alliance, Biden said.

However, the accession must be ratified by the parliaments of all 30 North Atlantic Treaty Organization members before Finland and Sweden can be protected by Article Five, the defense clause stating that “an attack on one ally is an attack on all.”

Europe too reliant on US for security – Finnish PM

EU to fine companies that break sanctions against Russia