The last two matches on Day 6 of the Qatar 2022 FIFA World Cup ended in stalemate as the USA held England in a 0-0 goalless draw, while South Americans Ecuador showed its resilience as they came from behind to earn a point against the Netherlands after 1-1 result.

England started with captain Harry Kane in attack at Al Bayt Stadium in the city of Al Khor, with Bukayo Saka and Raheem Sterling on the flanks. The USA started with Haji Wright in up-front, supported by Christian Pulisic and Timothy Weah.

USA forward Weah set up midfielder Weston McKennie with a cross, but he fired his effort over the bar. Moments later, Pulisic’s powerful strike crashed off the crossbar. Before halftime, England almost opened the scoring when USA goalkeeper Matt Turner denied Mason Mount to cap off the action in the first half.

In the second half, USA came out the stronger of the two sides as they put pressure on England. Defender Harry Maguire made a series of blocks to keep his side in the game as USA looked to grab a win.

However, the match finished 0-0 as the USA did enough to boost its hopes of progressing from Group B with a valuable point.

It finishes all square between England and USA. One point apiece to keep things close in Group B.@adidasfootball | #FIFAWorldCup

England only need a point against Wales to qualify in their last match. For the USA, A win against Iran in their next match would see them into the last 16.

USA sits third in Group B, a point behind Iran while England are in first place with 4 points.

Ecuador came from a goal down to earn a valuable point against the Netherlands after a 1-1 draw in the second 2022 FIFA World Cup Group A match, at the Khalifa International Stadium in Doha.

Dutch winger Cody Gakpo’s scored his second goal of the tournament to give Netherlands the lead in the 6th minute. However, Ecuador equalised at the start of the second half through Enner Valencia, scoring his third goal of the tournament. Valencia was later forced off on a stretcher after picking up an injury. The match finished 1-1.

Each team takes a point!@adidasfootball | #FIFAWorldCup

The result means Ecuador and Netherlands are yet to qualify for the last 16. However, host nation Qatar have been eliminated from the tournament, as they lost 3-1 to Senegal earlier in the day.

This means Ecuador will progress if they avoid defeat against Senegal, while the Netherlands will need only a point against Qatar in their final group game to qualify. 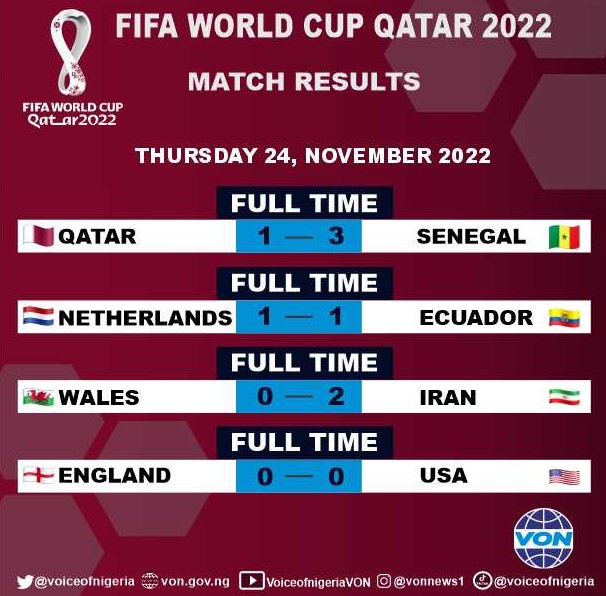