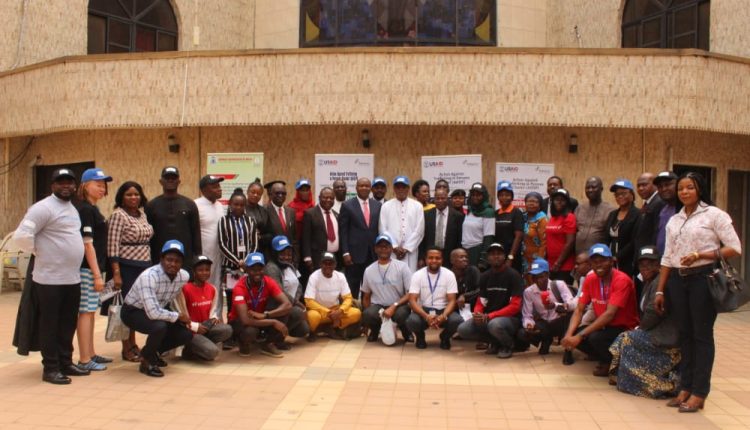 USAID Partners with Nigeria on Campaign Against Human Trafficking

Stakeholders in Nigeria are taking up initiatives to curtail the scourge of Human Trafficking as it poses a global challenge.

In line with this, the US Government, through its agency USAID in Partnership with Nigeria has formally launched an advocacy Campaign Hashtags on Action against Trafficking in Persons Cluster in Abuja, Nigeria’s capital.

He also commended the Justice, Development, and Peace Commission, JDPC of the Abuja, Catholic Archdiocese for its effort in stemming the tide.

The auxiliary Bishop of the Archdiocese, Most Rev Anselm Umorem, spoke on the essence of the project and the strategy adopted so far.

On #FundNAPTIP, he called on the Nigerian government to increase budgetary allocation and private sector intervention for NAPTIP.

He said;  “The JPDC Abuja with the support from Palladium USAID is implementing the SCALE Project; Strengthening Civil Advocacy And Locally Engagement they sign in line with countering Trafficking in Persons Component objectives. The advocacy issue to be addressed cut across increased funding of the local government agency, NAPTIP, promoting the prosecution of Traffickers and addressing inadequate service provisions for survival in Nigeria, especially through the activation of the victims of Trafficking Trust fund. The Strategies include capacity strengthening from Members, Advocacy engagements, Campaigns, and Public Awareness to achieve our goal.

According to the Auxiliary Bishop, the action against trafficking in Person clusters would formally start the Campaign and public awareness drive for the project while the harsh tags would reinforce discussions with relevant stakeholders on advocate task as well as serve as a communication reference throughout the project cycle.

Rev Umorem further said that the Media’s harsh tags would run throughout the length of the SCALE Programme and beyond to educate citizens, and the public, and mobilize support for the implementation of the Trafficking in Persons Act and Related matters.

In his presentation with #SayNoToHumanTrafficking, Mr. Desmond Galba from NAPTIP described it as a heinous crime that must be fought with all venom and bitterness requiring concerted efforts of every stakeholder.

Similarly, a Legal Practitioner in Nigeria, Damien Dodo, on #ConfiscateTrafickingproceeds also lends his voice calling for increased funding considering the monumental challenges NAPTIP faces in terms of Funding to execute its mandate.

Dodo said; “The clear indication of this is that the judicial process has played out, someone has been charged, someone has been convicted and the government or the prosecuting agencies have been able to lay their hands on the big money he/she had made from trafficking. So it is not enough for government to confiscate the proceeds of human trafficking. When you confiscate the proceeds, the victims of the crime should benefit from these proceeds. That makes common sense, it’s only logical because the victim is not in any way helped by the conviction alone. We urge NAPTIP to continue to ensure more convictions but these innocent victims whose lives are almost destroyed should be in a position to receive a bit of the compensation from the proceeds of these crimes.”

While fielding questions from Journalists, Voice of Nigeria sought plans by the Member clusters in the nation’s capital to replicate such gestures at the grass root towards nipping Human Trafficking in the bud.

Responding, Damien Dodo said; ”Now that the Commission at the diocesan level has taken the lead, it is also expected that every Chairman, every Secretary in every Pastoral area, and every Chaplaincy in the entire Archdiocese of Abuja are going to re-echo what has taken place at the level of the parish and this is just the beginning of the process which is systematic and it is going to be a sustainable Programme.