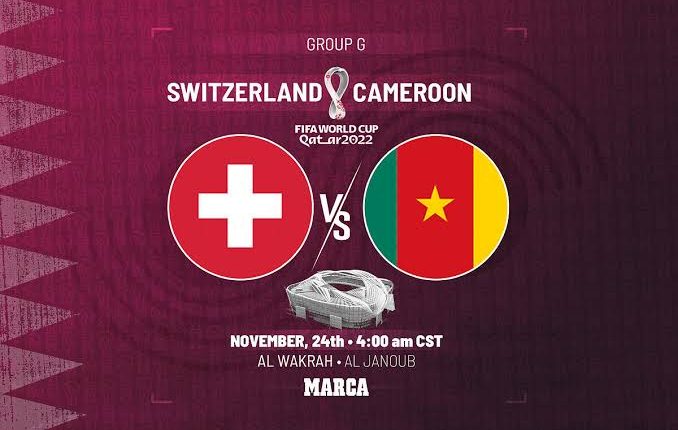 Switzerland and Cameroon are to tackle each other at the World Cup going on Qatar today, Thursday.

Both teams have been on same trajectories in the past year, with Switzerland ranking 15 and Cameroon,43 on FIFA list.

For starters, they both secured qualification to the World Cup in dramatic fashion. Switzerland held European champions Italy to a 1-1 draw in Rome in the penultimate qualification game in November last year, with Italian midfielder Jorginho missing a penalty in the 90th minute.

They went on to beat Bulgaria in their final group game and finished ahead of Italy to qualify for the tournament.

Cameroon, too needed a late extra-time winner in their final qualification game against Algeria, which saw the Indomitable Lions seal the fifth and last spot for African teams at the World Cup.

They are both coming off strong showings in their most recent major tournament appearance. Switzerland reached the Euro 2020 quarter-finals for the first time in their history last year and came agonisingly close to making in into the semi-finals, losing to Spain on penalties.

Cameroon reached the semi-finals of the African Cup of Nations earlier this year, where they were knocked out by Egypt on penalties.

Interestingly, the two sides have never played each other before. Now they’ll met on the biggest stage of all.