Germany snatched a 1-1 draw with Spain at the Qatar 2022 FIFA World Cup after late equaliser by Niclas Fuellkrug, while 2018 finalists Croatia knocked Canada out of the competition after a 4-1 victory on Day 8 of the tournament.

Spain started the match in control with their silky passing and almost took the lead through Dani Olmo, but German goalkeeper managed to make a save which then struck the bar. Defender Antonio Rudiger thought he had given Germany the lead after a powerful header, but VAR ruled the goal out for offside.

In the 62nd minute, Substitute Alvaro Morata fired Spain into the lead with a neat finish after he was found by Jordi Alba’s cross.

Germany looked to be in severe danger of repeating their group stage exit at the 2018 FIFA World Cup in Russia. A defeat against Spain after Germany’s shock 2-1 opening loss to Japan would have left Hansi Flick’s men facing a huge challenge to get into the last 16 of the competition.

However, Germany capitalised on a defensive error by Spain with the ball falling to Niclas Fuellkrug, who made no mistake as he equalised for the four-time world champions in the 83rd minute.

The match finished 1-1 as nothing could separate Spain and Germany in the match of the day.

The result leaves Germany facing a must-win match against Costa Rica. Spain have not yet progressed from the Group and would need only a point to book their place in the last 16.

An exciting one ends in points shared. 🇪🇸🤝🇩🇪@adidasfootball | #FIFAWorldCup

Spain tops Group E with four (4) points from 2 games, while both Japan and Costa Rica remain on three (3) points. Germany have recorded only one (1) point in the Group and would need to beat Costa Rica to have any chance to progress.

Japan and Costa Rica could also qualify from the Group as well with a victory.

Two goals from Andrej Kramaric secured a 4-1 victory for Croatia against Canada, knocking the North American nation out of the 2022 FIFA World Cup.

Croatia then took the lead just before halftime when striker Marko Livaja’s shot struck the back of the net to give the European nation the edge while going into the break.

In the second half, Kramaric found the net yet again from an assist by Perisic as he calmly placed the ball into the bottom corner in the 70th minute.

Canada had no answers as they weren’t able to contain Croatia’s attack as they looked for a way back into the game.

Croatia then put the icing on the cake in stoppage time when Lovro Majer tapped the ball into the net to make the scores 4-1.

Croatia now tops Group F with four (4) points, needing only a draw in their final game against third-placed Belgium, who are a point behind, to progress.

After two defeats, Canada’s exit at the group stage was confirmed, leaving them to face Morocco, also on four points, in their final game. 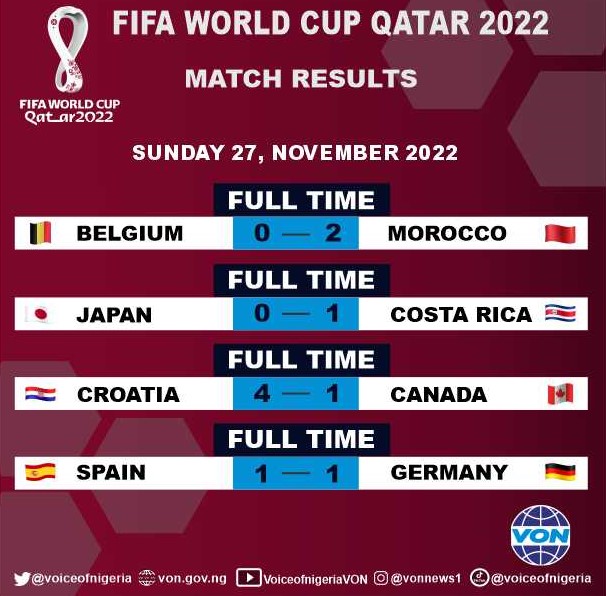