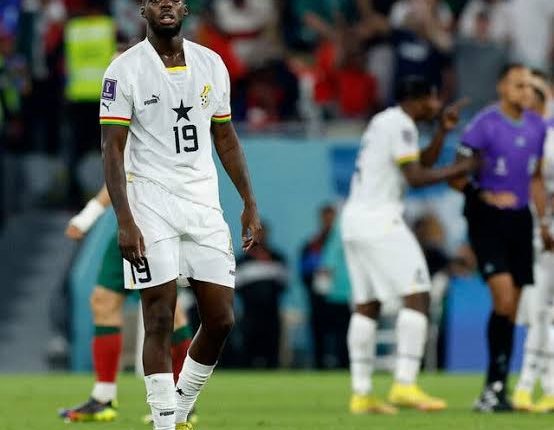 Last updated Nov 25, 2022
0 534
Share
The Ghanian national team gave Portuguese team a run for their money in what can only be described as one of the most thrilling second half game of the World Cup tournament so far.
The game started by 5 pm Nigerian time with Portugal passing the ball.
Christiano Ronaldo made an early attempt to score but Ghanian goalkeeper saved  the situation.
Portugal was all over the place, taking possession of the match from the beginning of the match till end of first half.
At the 30th minute, Ronaldo scored but was disallowed as he committed a foul before he was rewarded with the score.
Portugal kept pressing the Ghanian team relentlessly with 62% to 38% possession but could not find the net of the Ghanian.
The first half ended goalless.
Ghana made their first goal attempt at the 53rd minute as well as a nearly goal counter attack at the 54th minute.
Andre Ayew and Williams picked up a yellow card at the second half.
At the 65th minute a penalty was awarded to Portugal and scored by Christiano Ronaldo making him the first player in history to have scored in five world cups. Beating the records of Pele of Brazil and others who scored in four world cups.
This goal marks his 118 goals for Portugal.
Kudos fired a devastating shot at the 71th minutes and the effect of this shot motivated the Ghanian as Kudos once again made an angular cut by the side which was converted by Andre Ayew, Ghanian captain at the 72nd minute. This made the 23rd international goals for Ayew.
At 75th minute Ayew  and Kudos were substituted simultaneously.
Just 2minutes after, while Ayew was still celebrating his goal at the bench side, the Portuguese scored again to cut off his celebration. That was also accompanied by yet another goal at the 79th minutes which is also a two minutes intervals as the second goal
Bukari, Ghanian striker replied with another goal at the 89th minute making it 3 goals to 2.
At the die minute, the Ghanian had a golden opportunity to equalize the game when Portuguese goalkeeper lackadaisically dropped his ball on the floor without knowing that Ghanian striker was behind him. But unfortunately the Ghanian striker could not convert it. It was a most unfortunate moment for Ghanian and fans.
However, Ghanian team gave Portuguese team a fight of their life. So far I think this is the best second half moment of this tournament so far.
Monitor/Samuel Isaiah