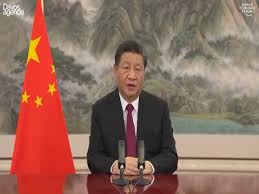 It is his first visit outside mainland China since the start of the pandemic nearly two-and-a-half years ago.

He said Hong Kong had “risen from the ashes” after a series of challenges.

China took control over the territory after ‘pro-democracy protests’ in 2019-20 and has been accused by critics of crushing Hong Kong’s freedoms.

Mr. Xi, who travelled by high-speed train, was greeted at the station by pupils waving flags of China and Hong Kong.

“Security is tight around the convention centre” hosting events, with roads closed and a no-fly zone overhead.

No details of the president’s itinerary have been made public.

Like other officials, she is reported to have had to do this to attend a welcoming banquet for Mr. Xi. Reports said

Mrs. Lam mentioned nothing about her immediate future plans in her final press meetings – but looking for a new home with space to store piles of cash is probably on her to-do list. “She is currently under US sanctions, which makes her unable to bank her salary, reported to be worth a few hundred thousand dollars per year.” Reports said

Before the handover, China promised to protect democratic freedoms for 50 years in the special administrative region – but new laws introduced in 2020 have effectively silenced all criticism in the territory.

The government in Beijing can veto changes to the political system, and pro-democracy forces have been frustrated by what they see as the “slow pace of political reform.”