Chelsea manager Thomas Tuchel has slammed referee Anthony Taylor and Video Assistant Referee (VAR), for their decisions in the thrilling 2-2 Premier League draw with Tottenham Hotspur on Sunday, saying his side deserved to win.

Harry Kane’s last-gasp header earned Tottenham a point in the draw , which ended with Tuchel and Tottenham Hotspur manager Antonio Conte both being shown red cards.

Tuchel said he felt Kai Havertz had been fouled in the build-up to Tottenham’s first equaliser, and that Richarlison was offside and blocking the view of keeper Edouard Mendy. He added that new signing Marc Cucurella had had his hair pulled by Tottenham centre back Cristian Romero shortly before Kane’s dramatic leveller. 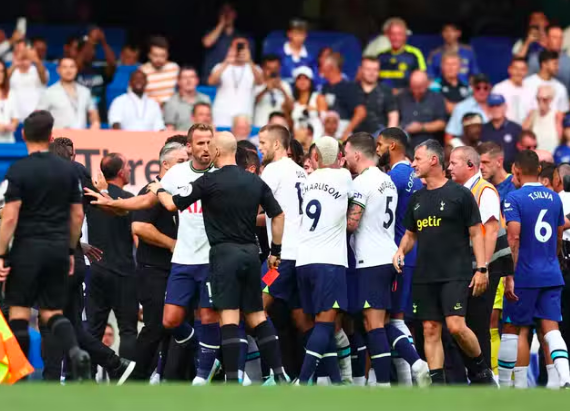 “Pull someone else’s hair, stay on the pitch and attack the last corner. This is for me without any explanation and I don’t want to accept it,” Tuchel told reporters.

“Both goals should not stand and it’s a fair result because we were brilliant, deserved to win. This is my point of view.”

An online petition calling for referee Taylor to not be given Chelsea games was launched on change.org shortly after the draw, and has received more than 64,000 signatures.

When asked about Chelsea fans’ view that Taylor should not be allowed to officiate the club’s matches in future, Tuchel said, “Maybe it would be better.”

“But honestly, we also have VAR to help make the right decision,” added Tuchel, who could face sanctions for his criticism of the referee.

“If he does not see it, I do not blame him. I didn’t see it. But we have people at VAR who check this. Then you see it and how can this not be a free kick and a red card? This doesn’t even have to do with the referee in this case.”

“Huge, huge misinterpretation of situations. I’m happy to let the game go, but let it go in every direction please and not like this. I don’t even know if I will get punished for my sentences now.”

When it was pointed out to him that he would most likely miss Chelsea’s next league game at Leeds United on Aug. 21, Tuchel said, “So … good. I cannot coach, but the referee can whistle the next game.”