Arsenal manager Mikel Arteta said striker Gabriel Jesus is a “real threat” as the Brazilian marked his home debut with two goals and two assists, as the Gunners beat Leicester City 4-2 in the Premier League at the Emirates Stadium.

Gabriel Jesus, who joined from Manchester City, struck twice in the first half and was involved in further goals for Granit Xhaka and fellow Brazilian Gabriel Martinelli.

The 25-year-old could have scored a hat-trick and was applauded off when substituted late on.

“We know what Gabi can do. He scored two and got two assists and is still disappointed because he thinks he should have scored four,” said Arteta, who worked with Jesus during his time as assistant manager at Manchester City.

“That’s the standard, that’s the mentality. You need to go to a different level.”

Jesus’s influence on his team mates was clear as Arsenal’s free-flowing attack looked potent on Saturday.

Leicester’s defenders were given a torrid time as Jesus showed the kind of form that earned him many fans at City even if he struggled to nail down a starting spot.

“I wouldn’t like to play against him. I’ve never been a defender, but I can imagine I wouldn’t enjoy it,” Arteta added. “He’s so mobile, so intuitive, always sharp and proactive to play in any moment and phase in the game, and it’s a real threat.”

“I think it lifts the standards the way every day he is, the way he’s talking to (his team mates), the way they are connecting. I think it’s very natural, but at the same time, it’s pretty impressive to do it that quickly.”

Jesus looks like a key man in Arsenal’s pursuit of a top-four return and Arteta knows he must manage the Brazilian carefully to keep him at his top level.

“That’s why we took him off,” Arteta said. “I think he’s played 18 starts in the last two seasons and we’re gonna demand him to start a lot of games, so we have to manage that load when we can.” 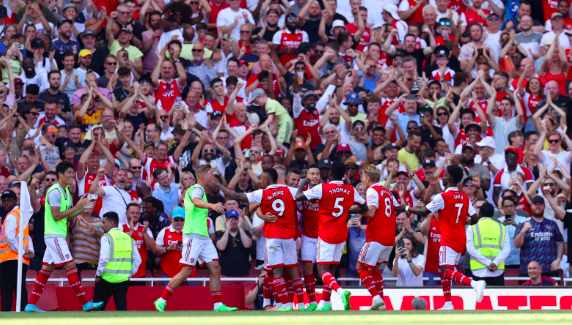 The mood around the stadium was buoyant and Arteta praised the way the fans responded to William Saliba, also like Jesus on his home debut, after he scored an own goal early in the second half.

“What they did today with William Saliba after the own goal is something I’ve never seen anything like that in my career,” Arteta told reporters.

“That shows the connection and really to be there when it matters and when it’s difficult. We should be really proud to play in front of them because that was special.”

Arsenal will face new promoted side AFC Bournemouth away from home in match day 3 of the English Premier League, on the 20th of August, 2022.