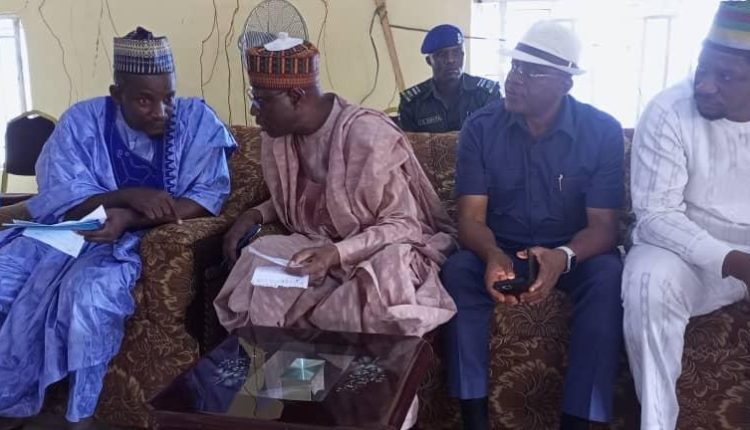 A high-powered delegation from the House of Representatives has commenced its fact-finding investigation in Wase Local Government Area of Plateau State over the kidnappings and killings of citizens by kidnappers who also demand for ransom worth several millions of Naira from the victims.

The lawmakers who noted that it was the responsibility of the Government to protect lives and properties of the citizens, commiserated with the families of those who lost their lives during the series of attacks as well as other victims.

Chairman of the fact finding Ad-hoc Committee, Hon. Abubakar Fulata while noting that the motion on the killings in Wase Local Government and Plateau State in general was sponsored by the Deputy Speaker, Hon. Idris Wase and supported by the 360 members.

He said that the house was concerned about the killings in Plateau State, hence the resolve of the Ad-hoc Committee set up by the House to embark on the fact-finding investigation with a view to make profound recommendations for the House approval and transmit the same to the Federal Government for appropriate action.

“Aside from Borno, Yobe, Adamawa, and Benue as well as Zamfara, Sokoto and some parts of Katsina State, Plateau State is one of the most affected States by the security challenges”. Fulata said.

Hon. Fulata who addressed the Chairman of Wase Local Government, Dr. Ado Abubakar and Village Heads of the affected communities, assured that the delegation will present its far-reaching recommendations on the floor of the House for further legislative action, with a view to proffer lasting solution to the lingering security challenges.

“We are here at the instance of the House of Representatives about a motion moved by the Deputy Speaker on the killings in Wase Local Government and Plateau State in general and in the bordering states, Bauchi, Taraba and Gombe. We’ve come here, we’ve interacted with the leadership and people of various Communities affected. It’s very unfortunate that terrorists and bandits are having a free day here, they have stopped farmers from cultivating their lands, they are abducting people for ransom, and there are a lot of atrocities being committed. This is what we observed here so far.” He said.

Hon. Fulata also disclosed that the Ad-hoc Committee will meet the State Governor with a view to brief him on the outcome of the Delegation’s fact-finding exercise, assured that the House would do all within its Constitutional powers to bring succour to the people.

“When we go back, we will write our report and table it before the House and it is the House that will take the last step; ours is to recommend.” He said.

On the scheduled meeting with Governor Simon Along of Plateau State, he said that the Delegation “will brief him on our findings here and our interactions with the communities.”

“It is very gladdened that at least out issue has been taken up at the national level and we hope and pray that its going to yield fruits very soon. So that at least out people will be able to use the remaining raining season to farm.what they are going to consume next year.

“Because it’s adversely affecting the farming activities and also the activities that is within the Local Government.

“Wase Local Government is largely agrarian, it’s either among 10 people, six to seven are farmers and three to four are herders.”

On the efforts made so far by the Local Government to bring succour to the affected Families and victims, he said: “We have done a lot, the first was to mobilize the whole Community through uniting them on a single mission, that is to combat these criminals. And we have effectively achieved that.

“The second thing is that, where the communities are affected, we have taken some immediate relief materials.

“We’ve also empowered our Vigilante by getting some Pump Action Guns for them, we have a total of 80 so far. But because of the economic crunch, we could not go further and that is why we are trying at all cost to see that, the other two senior Tiers (Federal and State) Governments come to our rescue too. So that at least, our people will be able to farm this year and get what they are going to eat.”

According to the Paramount Ruler of Kuru, Da Patrick Mandingo, the attacks on Kuru was dated back to 2001.

On his remarks, Hon. Dachung Bagos who represents the affected communities in the House of Representatives, no fewer than 50 people especially women and children were killed following the serious attacks by terrorists in the 5 districts of Jos South, of which Kuru is the most hit.

According to Hon. Bagos, “what happened in the last one year is very terrible,” adding that efforts are being made to reinforce security in the affected areas with a view to safeguard lives and properties of the affected communities.

Other Village Heads who spoke during the interactive sessions held at Bashar and Wase Local Government Area headquarters, disclosed that over 3,000 cattle worth several millions of naira have so far been rustled by the perpetrators of the heinous crime, while several people lost their lives during the period under review.

Another Village Head who spoke during the interactive session, disclosed that the kidnappers demanded for ransom of N500,000 from each of the seven people kidnapped earlier this week, adding that they were all released after the payment.

One of the Village Heads, disclosed that one of the farmers who used to harvest 700 bags of corn couldn’t go to farm as a result of the activities of kidnappers, thereby losing about N7 million per farming season.