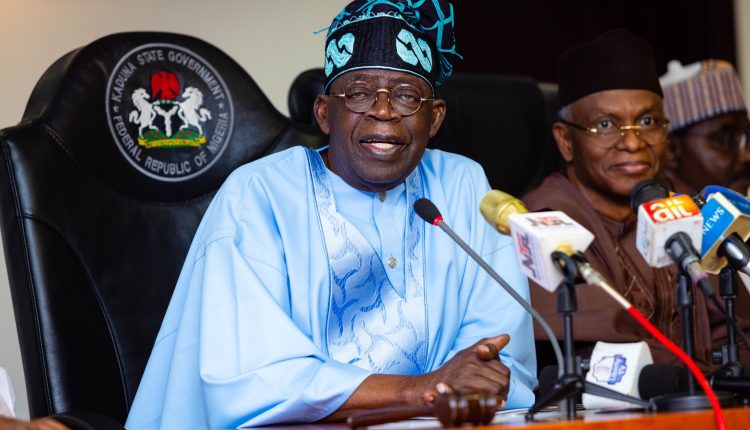 The National Leader of the All Progressive Congress, APC, Bola Ahmed Tinubu, says there is a need to use maximum force to fight terrorism.

Tinubu stated this when he paid a sympathy visit to condole Governor Nasiru El-Rufai and the people of Kaduna State over the recent Kaduna- Abuja train attack.

Last week, our nation was shocked by the deadly attack on a Kaduna-bound passenger train.
Today, in the company of leading and respected figures in the APC, I visited the state to commiserate with Governor Nasir El-Rufai and the people of Kaduna. pic.twitter.com/KnrQTU4BOS

He described the train attack as a disaster not only for the government and people of Kaduna but the nation.

According to the National Leader, the deteriorating security challenges confronting Nigeria must be dealt with using all the support needed.

The recent attacks and killings by terrorist groups in whatever form is no longer acceptable and must stop. I urge the federal and state governments to work even more closely together to wipe out this menace. pic.twitter.com/TEGMUfxkYL

He noted with dismay that the attack exposed innocent Nigerians to all forms of hardship and suffering.

“With all this happening, there is the need to submit to the will of Almighty Allah at all times,” he stressed.

Tinubu commended Governor El-Rufai for being committed to service, human development, and nation-building. He also pledged to support him against the harmful elements that seek to deter him from commitment to service.

In his remark, the Governor described Tinubu as a leader with concern for humanity.

He promised that his administration would continue to do its best in the discharge of duties and be more committed to ensuring security for Kaduna residents.