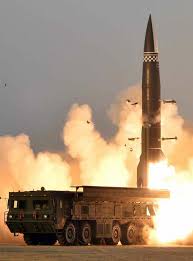 North Korea has fired two short-range ballistic missiles from the Pyongyang area towards the country’s east coast, according to South Korean and Japanese officials, marking Pyongyang’s fourth missile test launch in a week.

Japan’s NHK national television said “multiple missiles” were fired from North Korea on Saturday morning and were believed to have landed in the Sea of Japan, though outside of Japan’s exclusive economic zone.

“What appears to be a ballistic missile was launched from North Korea,” the Japanese coastguard said in a statement issued at 6:47am (21:47 GMT) local time on Saturday.

In a second statement issued about 15 minutes later, the coastguard said another apparent ballistic missile was launched.

The office of Japan’s Prime Minister Fumio Kishida tweeted that the latest missile launch was being analysed and instructions issued for the safety of people, aircraft and vessels.

North Korea fired short-range ballistic missiles into the sea on Wednesday and Thursday in the hours before and after a visit by US Vice President Kamala Harris to South Korea during which she emphasised the “ironclad” United States commitment to the security of its Asian allies.

The latest launch also comes after the navies of South Korea, the US and Japan staged trilateral anti-submarine exercises on Friday for the first time in five years.

“North Korea’s actions threaten the peace and safety not only for Japan but also the region and the international community, and are absolutely impermissible,” Ino said, calling the four launches in one week “unprecedented.”